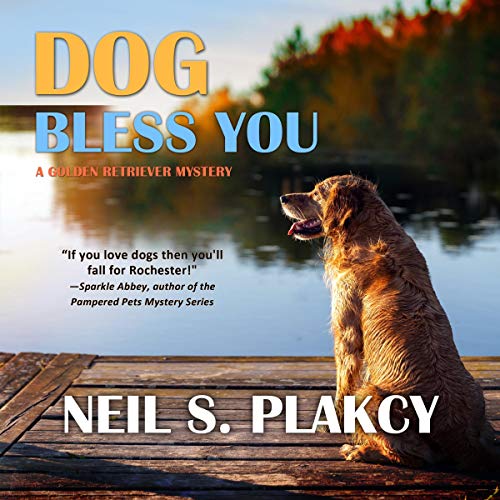 Autumn has come to Bucks County, and Steve Levitan has a new job: develop a conference center for Eastern College at Friar Lake, a few miles from campus. But on his first visit to the property, his golden retriever Rochester makes a disturbing discovery: a human hand rising from the dirt at the lake's shore. Whose hand is it? Why was the body buried there? The answers will take Steve, his photographer girlfriend Lili, and the ever-faithful Rochester to a drop-in center for recovering drug addicts on the Lower East Side, a decaying church in Philadelphia's Germantown, and finally to a confrontation with a desperate killer.

I love this series :)

What did you love best about Dog Bless You: A Golden Retriever Mystery?

I really like how after four books in the series, Neil Plakcy is able to continue to write stories that not only have a real human (and canine) touch, but ones that are intriguing and keep you going till the end.

What was one of the most memorable moments of Dog Bless You: A Golden Retriever Mystery?

It was really touching (and I'll try not to do a spoiler here) when the sibling of the victim comes face to face with where his older brother was murdered. The narrator really got the different characters and emotions. The victim had been into some things he should not have, but part of his intentions were to help his younger brother both medically and educationally.

Well what I can I say, I liked the ending where Steve Levitan and his faithful Rochester break up the bad guys plans.

I think I covered it in the 'most memorable' part, but there were others. Steve's friends genuinely care about him and while they know he's technically breaking the law, don't judge him and instead want to help. There's some moving parts that lead up to a more moving part at the end.

With Rochester's amazing abilities, I'd dump the college and start a PI business. 15 words aagh!

I tend to read series out of order from time to time; and this was one I had worked my way back. I’m really glad I had,because Mr Plakcy’s writing had definitely improved with time!

This is probably one of the most diverse, darker, and difficult storylines with inner demons in most of the characters.

Steve spirals into his addition with hacking. I don’t understand the part about his friend, Rick, enabling him; or the police departments enlisting his help because they are ‘too busy’ and want him to investigate on their behalf. With Steve’s personality, those conversations could/should be skipped over while he just snoops and does his own thing. However, there it is, a small quirk - but it’s a cozy!

Our victim had a troubled life and it turns out he was trying to turn it around when he was killed. As it unfolds, the family dynamics and his reasons for his actions and decisions seem so realistic and touching.

Sometimes, Steve recaps events -verbatim- to the reader during conversations. So we hear the same thing over and over again. Mr Plakcy has tightened this up (rather, deleted this repetitiousness) in future books.

We also hear Rick and Steve reflecting on their past marriages and watch as they have a spurt of personal growth. This was really well contrived!

A big section, although it was a side story - was the high school students spending time at the college. This brought an incredible depth to the world building and setting. It was so realistic and modern!

Our Rochester is lovely (although I am a cat person) and the scenes with his health issues and bodily functions were TMI. However, I do have friends who are dog lovers and don’t think twice about sharing either, when polite conversation demands to ask about the pets.

I DO wish the series would continue, but with more technology on cell phones/text messages/apps, it would be difficult for Steve to continue to gather information. Besides, I’m not one who wants to watch someone wallow in their addictions!

This was not the best of the series, but it fits in and the characters are evolving, as is the author!

Rochester and Steve do it again

I like the characters a lot, especially cop Rick Stemper. Steve is an interesting character and this book delves deeper into his hacking obsession.

The intermittent mispronounciations (e.g., chic pronounced chick instead of sheik) and the editing errors (e.g., taunt for taut) that carry into the audible version are a nuisance and distraction from the story.

Was Dog Bless You: A Golden Retriever Mystery worth the listening time?

I listen while walking my dog...not to heavy

The mystery is almost beside the point, the point being the dog. Unlike many narratives featuring a canine, this series gets down and dirty in the dog world. There are hairs on the owner's trousers, the dog eats God-knows-what and gets sick, with nasty results, All of this is described. The dirt is in the details, especially this time out.

I've listened to all four of of these "Golden Retriever Mysteries," which suggests a certain amount of liking. And I do like them, even though the writing is somewhat awkward, the conversations hover close to the stilted end of unbelievable and the pacing runs slack before being abruptly tightened, only to run slack again.

And yet I like the bones of these stories. The human hero is unusual, and the dog is fabulous. Yes, nobody could believe in its ability to unearth things at just the right plot points, but who cares? The dog is a glorious big goof.

The narrator is another kind of goof. His mispronunciations are genuinely funny, as in, "chic" pronounced "chick," for baby chicken instead of for stylish. Really, and downhill from there. I don't tend to like narrators who over-emote, but Kelly Libatique reads as if he's reading a kid to sleep.

The plots work, even this one, the latest, which is the weakest. I don't regret buying them, but if there were more on Audible, I'd be ready for break and not eager to download another.