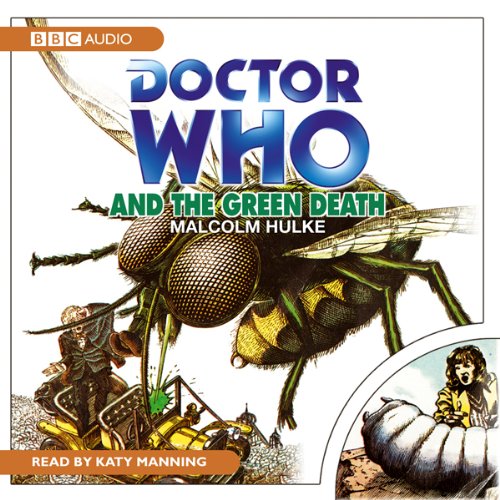 Doctor Who and the Green Death

By: Malcolm Hulke
Narrated by: Katy Manning
Try for £0.00

Another entry in our range of unabriged readings of classic Doctor Who novelisations, first published by Target Books in the 1970s and 1980s.

The Green Death begins slowly. In a small Welsh mining village, a man emerges from the disused colliery covered in a green fungus. Minutes later, he is dead. UNIT, Jo Grant, and Doctor Who in tow arrive on the scene to investigate, but strangely reluctant to assist their inquiries is Dr. Stevens, director of the local refinery, Panorama Chemicals.

Are they in time to destroy the mysterious power which threatens them all before the whole village, and even the world, is wiped out by a deadly swarm of green maggots?

Katy Manning, who played Jo Grant in the original 1973 TV serial on which this book is based, reads Malcolm Hulke's complete and unabridged novelization, first published by Target Books in 1975.

Click here to see all the titles in our Doctor Who collection.
©1975 Malcolm Hulke (P)2008 BBC Audiobooks Ltd

"BBC Audio books has chosen well with its books and has taken the right approach with its readers....they benefit from new music and sound effects." ( Doctor Who Magazine)

What listeners say about Doctor Who and the Green Death

Still scary after all these years!

My first memory of Doctor Who was The Green Death ...and it terrified me! I was convinced those maggots would come up through the toilet!
It was fantastic to hear the story again and Katy Manning does a marvellous reading. Gripping and still terrifying! Better go and check the toilet, just in case 😁

Loved the recording of this classic story, and great to have Katy Manning narrate it.

But the 'dramatic' becomes irritating.