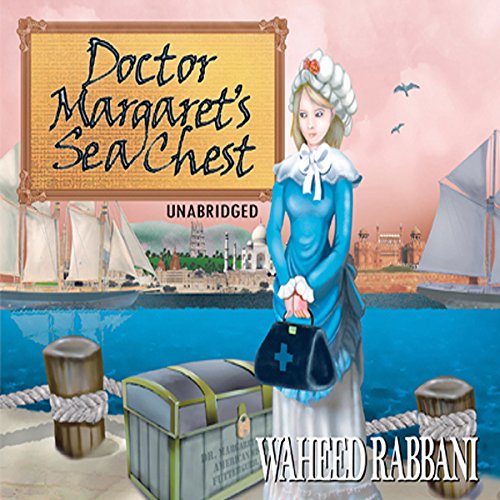 Doctor Margaret’s Sea Chest is Book I of a trilogy of historical fiction set during India’s struggle for freedom—Azadi—from the Raj. The books weave a tale of international intrigue, conflict, and poignant love between interesting characters of that era.

In 1965, an over 100-year-old sea chest, believed to be that of an American doctor, Margaret, is discovered in the storage room of a hospital in Delhi. Another American doctor, Sharif, who originally hails from Delhi and is on contract at the hospital, is entrusted with the task of locating the mysterious woman’s relatives and returning her trunk. Sharif tracks down Margaret’s descendants in Grimsby, Ontario, Canada. Her diaries, and other artifacts—such as the Kingdom of Jhansi’s crown—are found in the coffer.

Margaret, born in New Jersey to a Scottish Presbyterian clerical family, achieves her heart’s desire, in 1950, to become one of the first North American women doctors. She marries her Canadian cousin, Robert, and travels with him to serve in the Crimean war of 1854. In Crimea, they have to not only face hardships of battles, but also endure other conflicts. From events leading to and after the infamous Charge of the Light Brigade, Margaret meets a Russian officer, Count Nicholai. The surprise ending of Book I leaves Margaret in a quandary, whether to seek vengeance or to continue on with her journey to India. In the end, she believes she has made the right decision.

This is a warm, moving story that is beautifully & gently told. The audiobook is engagingly narrated. Highly recommended!