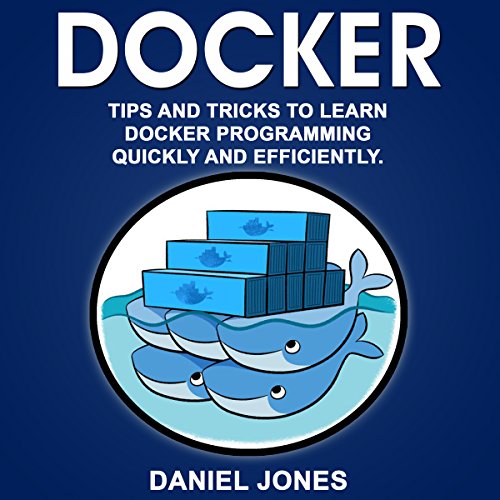 Docker programming is becoming more and more mainstream as time goes on, but is also becoming more complicated as well. To ensure you aren't left out in the cold, it is important to jump on the container bandwagon ASAP, which means learning as much as you can about Docker, including useful tips and tricks to make the process as easy and straightforward as possible. Luckily, that's where Docker: Tips and Tricks to Learn Docker Programming Quickly and Efficiently comes in, as it is tailor-made to take your Docker programing skills to the next level.

Written for those who already have a basic understanding of Docker and what it's good for, this audiobook instead focuses on tips and tricks for commonly used Docker functions, to ensure that you make the most of every interaction with the programming language without tearing your hair out in frustration along the way. If you have ever wanted to know how to use Docker images to the fullest, improve your daily interactions with Docker, maximize the effectiveness of any volume you create, or avoid the pitfalls and errors that frequently occur when trying to dockerize an application, then this is the audiobook for you.

Docker adoption rates have jumped in the past year by more than 40 percent, with more than 30 percent of all programmers currently using it to one extent or another. Don't get left behind, buy this audiobook today!

Inside you will find:

A breakdown of many of the most common container-based mistakes, and how to avoid making them yourself

Tips for improving the way you interact with images, volumes, and basic day-to-day Docker interactions

What listeners say about Docker