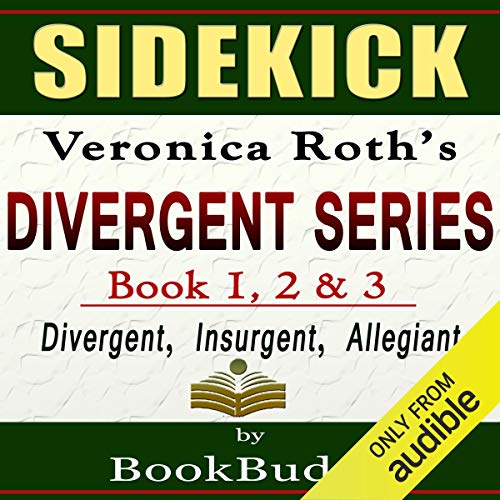 A dystopian trilogy, the Divergent series begins when Tris and “Four” (Tobias) turn 16. They do not fit into only one of five possible faction choices, so they are labeled Divergent. This labeling is the initial conflict in the trilogy. The many additional conflicts plus themes of sacrifice, freedom, individuality, and guilt are woven throughout the three novels, and they can all be traced with the help of this sidekick.

In Divergent, Tris chooses to join the Dauntless faction and manages to not only survive, but also excel during harsh Dauntless training. She is caught up in a faction battle, and the second novel in the series, Insurgent, follows her involvement in the struggle, as she and her friends become targets due to their Dauntless natures.

Allegiant provides answers about what exists outside the walled city, while introducing a final battle. Tris and her friends discover the truth about the factions' purposes and intents, achieving freedom in the process. As you read the Divergent series, the chapter analyses in this companion piece are especially useful for recalling the action in previous novels.

The Divergent series has many interesting characters that leave and reappear, thanks to love interests and biological relationships. The trilogy is written from a first-person perspective, so what we know of these characters is limited at times. Assistance in tracing their background and importance as they make multiple appearances throughout the three novels is provided in this comprehensive accompaniment.

Though this was the divergent book bundle. What a waste of time. Just some idiot describing what the books are about.

What a waste of a free trial. Bye audible, guess I’ll never be paying for this.

should be more clear in the Description that this is not the divergent series but a breakdown/analysis of the 3 books.

it wasn't wat I wanted at all. didn't like it would not tell people to download it

I got this because I thought it was all three books in a bundle deal, and was surprised to learn it was a girl talking about all three books. I stopped listening then listened to the3 books then came back to this book. It did help brake down the three books but it felt a little bit like was reading (listening to) cliffs note for a book report I for got to read the book on.. it was interesting but I am not sure what the point of it was. I gave it good stars because it was about a great book, it was spot on and the reader was good, and it did make me think some. But it seams like this would be better for a book club type of situation, not really to listen to on your own.

Disappointed wanted the books can I get my money back. My first disappointment with Audible.

SPOILER ALERT. I'm glad I got this,.

I didn't buy anymore of the series. I have read to many similar novels Ty.

Great overview of the series.

This overview has convinced me to get the entire series. It was well read and provides interest in the series.