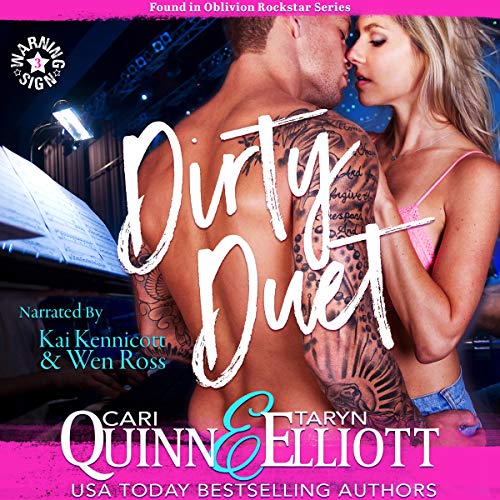 He’s the wildest guy in his band, but falling for a virgin groupie-in-disguise might be his craziest move yet.

Keyboardist West Reynolds’s idea of commitment? Going out for breakfast with a woman after a night of bed-breaking action. The only thing he gets serious about is Warning Sign, the band he formed with his two best friends. Then he meets a woman being hauled off by security, and she’s fascinated by him.

To her, he’s a subject to study. Like a bug under a microscope with a big…head.

Lauren Bryant is a student of psychology, and now she’s going in depth on rockstars. Specifically, fans. What makes a woman turn into a lust-driven groupie?

Is it the music?

She isn’t sure, but she never expected to get her own night with a rockstar. One where he’s on top, doing some studying of his own....

She isn’t sure, but she never expected to get her own night with a rockstar. And she just figured out the ultimate way to get inside a subject is to let the subject inside you....

What listeners say about Dirty Duet

Wow, Cari Quinn and Taryn Elliott deliver another amazing story set in the Oblivion word and I loved every word of it. This series features the band members of “Warning Sign” a new up and coming rock band who is the opener for Oblivion. This third book is West Reynold and Lauren Bryant’s story. West is the bands keyboardist and Lauren is a geeky posing as a groupie for research purposes. She was busted trying to get backstage at one of their shows and was banned from future shows. But that does not stop her and when West surfs into the audience and he notices her and is intrigued. He brings her on stage and she impresses him with her skills. I love how these two clicked, her honesty and ability to speak her mind was admirable, they were perfect together and for each other. I also loved how everything plays out, there story is well plotted and there is never a dull moment, with plenty of drama, emotional and heartfelt moments, a touch of angst and some hot loving and romance. Thank you Cari Quinn and Taryn Elliott for another fantastic book!!

Kai Kennicott and Wen Ross are talented narrators and voice artists. Their duet performance continues to rock this series, bringing the characters and their stories to life. They do an awesome job portraying each of the characters, grasping their persona to a tee, sounding just as I picture them to sound. Wen Ross’ take on West was perfection, as was Kai Kennicott’s Lauren. They are entertaining storytellers and a pleasure to listen to. Thank you for another fabulous listen🎧

I adored this couple. They are both wild in their own ways. Lauren is trying to find herself as well as redeem herself. West is forging his own path into stardom. When combined they find what they didn’t even know was missing.

This is the third in a series and the first for me. This can be read as a stand alone.
Lauren just cracks me up with her off the cuff comments. Then you have West! He seems like he would be unattainable but he seems so nice and down to earth. Such a fun guy and so nice!

Very enjoyable and light. I did listen to this on audio. Wen Ross and Kai Kennicott did great!

I loved this story but somewhere in the end the author just stopped it seems. I feel like I am hanging on a cliff. maybe I'll get the rest of the story in the next book

Another great addition to oblivion

Absolutely loved this story. West and Lauren both are trying to move on from their past. Lauren's no filter is absolutely refreshing and funny. West is great. I love this relationship and the fact that you see what is going on in the band and everything is tied and you see other characters from other series. Cari Quinn and Taryn Elliot have again made you want more and you can't put this book down. Can't wait for the next book in this series.

Kai Kennicott and Wen Ross narration brings this story to another great place. I could not stop listening while I was driving.

Although this book is number three in a series, it was the first for me and I was able to follow along perfectly. Lauren is such a feisty person. I love her quick sarcastic comebacks to whatever is going on. West is a big softy even though his career makes him look like the big party goer who doesn’t care about anyone. Watching these two was great and I enjoyed seeing them grow to love each other. An amazing ending. Can’t wait to see what happened to the relationships before this couple in the previous books.

Be forewarned: This should be listened to with headphones if in public!
Dirty Duet is book 3 in the Found in Oblivion Series but can be as a stand alone. This is such a fun read and the narration is spectacular (no one does a steamy scene like Kennicott and Ross!). The story has both emotional highs and lows as well as truly laugh out loud moments. I loved Lo, our quirky heroine and West, as a caring but troubled hero. The story is well written and wonderfully narrated.

3.7 I am all about the rockstar romances and this duo has done a great job with intertwining together to create this story. Lauren being a psychologically major and having limited sexual experience fits the personality portrayed here but at the same time to me she seemed a bit robotic more often then not. West is the keyboardist for the band Warning Sign, he is all about his music and not much else until he catches Lauren in the crowd during a concert. As the story develops I did enjoy seeing Lauren open up and continue to push past what she’s known and be open to try all the desires she’s wanted. West shows us that there’s so much more to this man then meets the eye. This is a standalone in a series so if you don’t read the books in order you won’t be lost which in my case worked out wonderfully. This is my unbiased and voluntary review.

Who doesn’t love a good rock band story? This is a great listen the story of these two characters melts my heart just a bit. I love the sass as well. Narration is great as always with these two.