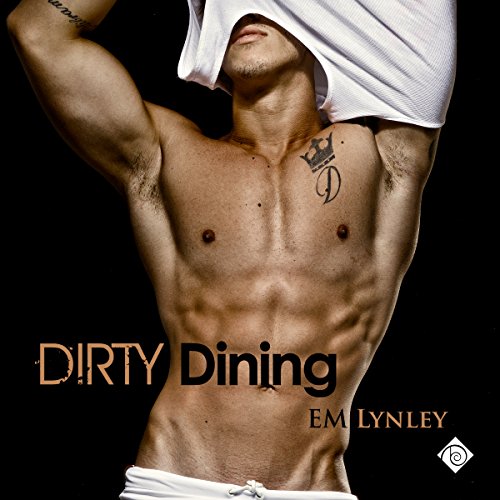 Jeremy Linden's a PhD student researching an HIV vaccine. He's always short of money, and when biotech startup PharmaTek reduces funding for his fellowship, he's tempted to take a job at a men's dining club as a serving boy. The uniforms are skimpy, and he's expected to remove an item of clothing after each course. He can handle that, but he soon discovers there's more on the menu here than fine cuisine. How far will he go to pay his tuition, and will money get in the way when he realizes he's interested in more from one of his gentlemen?

Brice Martin is an attorney for a Silicon Valley venture capital firm. When he's asked to take a client to the infamous Dinner Club, he finds himself unexpectedly turned on by the atmosphere and especially by his server, Remy. He senses there's more to the sexy young man than meets the eye. The paradox fascinates him, and he can't get enough of Remy.

Their relationship quickly extends beyond the club and sex. But the trust and affection they've worked to achieve may crumble when Jeremy discovers Brice's VC firm is the one that pulled the plug on PharmaTek - and Jeremy's research grant.

What listeners say about Dirty Dining

Yeah, I would. There are a few glitches with the story and narration, but overall, it was an enjoyable listen.

I would have explored certain aspects of Jeremy and Brice's relationship more thoroughly.

Which character – as performed by Zen Wolfang – was your favorite?

Brice. Perhaps because Jeremy was sort of written and read as a teenager in a way. Lot's of missunderstandings, jumping to the wrong conclusion and angst with him. Brice is older and more secure.

Yes, but it took a couple of days.

As I states above, this was an enjoyable read. My main issues were the angst in an adult book, I really don't like to have to hunt down my characters emotions. The way Jeremy changed his mind from one second to the next a lot, jumped to so many conclusions, angst. He's a PHd working on amazing stuff, but he's written like a teenager.

I did like this whole Dirty Dining aspect with the dinner club and the boys are the important items on the menu. Color coding the gentleman's identity, very ingenious and I quite liked it. Especially at the end with the whole, Officer and a Gentleman reference.

Narration was pretty good as well, I liked the different tones and inflections he used for the characters. My only issue with the narrator was, listening you know you're jumping forward, changing POV or chapter, but he didn't put any space between these things. A short few second pause would have been nice, I felt at times like he was running a marathon.

Good story but so so narrator

I really enjoyed the story but the narration was just okay. At times it was hard to distinguish the difference between the two main characters and there wasn’t any real difference in the tones used.

Dirty Dining by E.M. Lynley is crazy freakin' hot - I actually think I blushed (several times) while listening to the audiobook. And I'm thinking if this place existed in the real world, it'd be phenomenal... could you imagine ordering your men off a menu? Best menu ever!

Jeremy is trying to get his Ph.D. Money is tight, and he isn’t getting near enough tutoring jobs. With funding at his lab getting reduced, Jeremy takes an offer from men’s Dining club to help make ends meet. All he has to do is wear skimpy clothing, take off one piece at each course, as he serves wealthy men. Anything else ‘on the menu or night caps’ is strictly up to him. When he sees his first client, he thinks that a little play may not be too bad.
Brice ‘Mr Green’ wasn’t too keen at going to the dining club with his associate the first time until he met his serving bo. He found he could get used to having Remmy wait on him. The next time he has to take a client he chooses a different boy so he doesn’t get hung up on a guy that is working and having sex with men for money. Seeing Remmy with another man, Brice knows he is already in too deep.
I loved this story. It’s charming, sweet and sexy. The characters are well developed, and the concept of the dirty dining is interesting. I would love to see each serving boys story!
I got lost in the narration, and before I knew it, my book had ended. I think I could have listened to another two or three hours!
If you like fast-paced romances, a rags to riches story, hot lawyers, sexy men for pay, gentlemen’s clubs and some very hot man-sex this is for you!

Jeremy is a poor student at Berkley who is approached by someone for a job – temporary – of serving dinner to “gentleman” in skimpy clothing. Jeremy is really hard up for cash so he agrees to one night.

The dinner is more than Jeremy expected. The “boys” can offer many “extras” up to and including sex for a lot of money or nothing and still be rewarded greatly for their efforts.

Jeremy gets lucky the first night and meets Mr. Green (a pseudonym) with whom he clicks very well. They agree to a lot of “extras” and eventually agree to start seeing each other both in and out of the club.

Eventually there’s trouble in paradise and Jeremy realizes that his Mr Green – aka Brice – controls the funds that support his scholarship and his scholarship’s been pulled.

I mostly loved this story. It’s absolutely a bit like Cinderella meets Pretty Woman and every other rags to riches story out there but with a LOT MORE SEX. No joke. Pretty much every scene is a sex scene and it’s pretty hot but I got a bit bored of it.

I thought the romance between these guys was pretty realistic (as far as that can get) and it was paced very well.

Audio: Zen Wolfgang is new to me. He did a nice job with this. I could tell who was speaking though he didn’t do a lot to differentiate the voices. The sound quality was excellent and the emotions were well played.

Two first for me, this author in any form and this narrator. Both were great and will look them up again.

Jeremy has a hawt body, a brilliant mind and is broke. Brice is an attorney that has moved to the area not long ago after a break up from a long time boyfriend and is not really looking for anything because he’s still confused on what went wrong the last time.

As Jeremy makes the decision that he can do this, the dinner club thing, he is just that broke. Brice slimy colleague drags him to the club.

The first time for both, first day nerves are cute on both. With Rand, Kit and the dinner club guys cheering them on they make it through the first meal and after dinner drinks or night caps.

I just loved the commentary throughout this whole thing, when at the club, Kit making references that we stepped into Pretty Woman, then the last few lines at the club. The guessing and second guessing throughout, because both of these people are out of there comfort zones.

Both wanting a relationship but too proud, too confused, too insecure to know how to start one under the circumstances they met under.

I love how even though they met, lets face it in a sex club,we date, learn about them, dial it back, but the author not silly enough to stop the sex once it’s been brought to the table. Just able to mix it in with learning, it’s a nice blend.

And of course we have the normal misunderstanding, mistrust, and two knights in shining armor coming to save the day.

This narrator did a wonderful job with the different characters, the Happy the sad the and even the hawt steamy parts.

Dirty Dining was a perfect mix of hot sex and sweet romance. I’ve only read a few books by the author by I will check out her other books based on my enjoyment of this one.

I enjoyed the story just as much as she did. There was a fair amount of sex in the story but it fit perfectly. Jeremy and Brice were perfect for each other but just like in real life they didn’t see it right away. The push and pull between them was realistic. The sexual tension was electryifying.

The aspect of stripping waiters was interesting and different. Lynley did well the idea.

Recommended for anyone for a fun and sexy read.

Zen Wolgang (amazing name) did a decent job with the narration. I’ve heard better narrators but I’ve also heard far worse. He didn’t inflect his voice all that much and sometimes it was hard to tell who was speaking. However, it didn’t take away from my enjoyment of the book whatsoever.

What did you love best about Dirty Dining?

This book felt more like romantic erotica. From the cover to the story, Dirty Dining is hot throughout. I absolutely did not mind. For me this was the M/M equivalent of 'Pretty Woman' (and the book itself does reference that movie).

The characters are likable and have great chemistry between them. The sex is hot, creative and frequent. The narration was good.