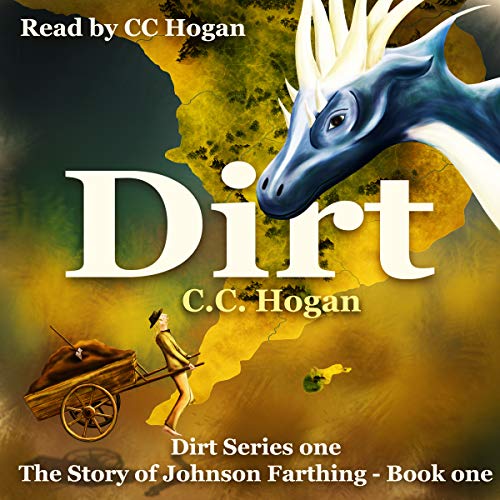 A fantastic tale of love, war, friendship, and dragons!

If Johnson Farthing thought that life as poor cart pusher in the coastal town of Wead-Wodder was going to be his lot in life, then he was about to get a rude surprise, and not necessarily a good one.

Once it becomes clear that his beautiful younger sister has been kidnapped along with the daughter of the Prelate, his life is completely turned on its head. Farthing has to rush across a vast ocean and a huge continent carried by an incredible Sea Dragon and accompanied by a strange magician if he has even a chance to save his sister Rustina.

And very strangely, neither the rich Prelate nor his chief of police seem keen to even lift a finger.

Dirt is the first book in a huge, continent spanning saga where dragons are an intelligent, cultured people, magicians cannot destroy mountains with a magic wand and the heroes have no wish to become tyrannical kings and queens.

But through all the dramatic events, the battles of life and death, Dirt is a place of humour, love and ultimately, the quest to find a home.

"I told Truk you would be slacking off the minute he turned his back," shouted the old fool, Barkles, who sold greasy vegetable pasties from a dusty stall on the corner. "Young people can't be trusted, I told him. I was right too."

"Shut your face, Barkles," Johnson shouted back as he grabbed his coat from his hand cart and put it around his shoulders to ward off a faint chill in the sea breeze. "I have been down that hole every day non-stop for nine days, and you know it too, since you have been feeding me your disgusting pies for most of them."

"Well, yours ain't posh. So they are definitely just pies."

What listeners say about Dirt

I enjoyed this story and the characters within. I like the way C.C. Hogan created a story line that is different than most. The kidnapping and adventure that follows keeps you engaged in the story. Looking forward to book 2

Some poor, some wealthy, throw in a magician, some fantastic dragons and a few become many as they rescue and have adventures to change their world.
To me it was a little slow to start, but hang in there, once it builds your involved in the outcome and left wanting more. As with the story, it took a little to realize the author as narrator was perfect for this book. All the characters flowed, no strain between male and female voices.
This audio was given to me free, and I voluntarily gave this review.