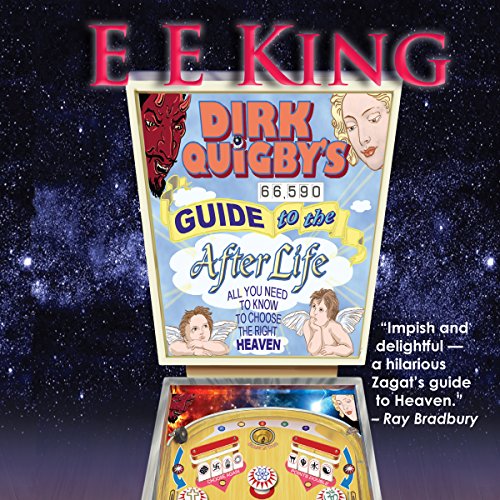 Dirk Quigby's Guide to the Afterlife

Hell's too full, so the Devil hires ad man Dirk Quigby to pen a travel guide enticing travelers to different afterlives: Hindu, Catholic, Protestant (that one's got a lot of subdivisions), Scientologist, and more. Instead of writing a boffo best seller, Dirk unites all religions in a common goal: kill Dirk.

E. E. King grew up in one of those tolerant households that don't force religion down kids' throats. This is the result.

"Impish and delightful - a hilarious Zagat's Guide to Heaven!" (Ray Bradbury)
"A fantastical, profound, hilarious and rollicking good ride through the heavens and hells of the afterlife! A wonderful book." (Margaret Cho)

What listeners say about Dirk Quigby's Guide to the Afterlife

Well performed with some novel ideas

There is a lot to like about the performance. The voice actor lift the words from the page with skill and good characterisation. However, this is a triumph of presentation over content. The writing is not especially good and the story is ultimately unsatisfying no matter how novel the premise. While I did enjoy this book, it was deeply flawed. That said, there were genuinely funny moments and the idea is very unusual. Neither good nor bad, this filled a few hours pleasantly.

It is a fun book. Worth the time. A great, funny overview of many religions.

This was a wonderful romp through world religions, the heavens they purport, and also the amusing story of a living dead human coming alive. Bravo!