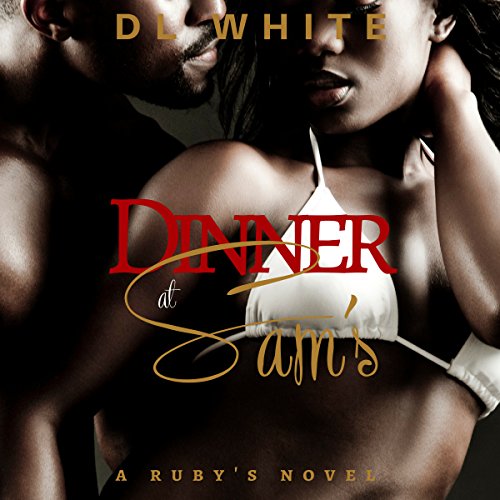 Dinner at Sam's: A Ruby's Novel

Vanessa Jackson is just trying to get divorced, not pick up a new man - and certainly not her divorce attorney.

Gibson Kincaid is trying to do right by his new client, but in all honestly, he wants to get Vanessa divorced...so he can have her to himself.

Vanessa's not-soon-enough-to-be ex-husband, Warren, isn't ready to let go of the young, naive woman he "rescued" from a different life 10 years ago. Though she and her girls are barely making it, life would be so much easier if she could divorce the son of a....

Gibson, the youngest of four Kincaid men, all attorneys at Kincaid Family Law, is the rebel. He's never going to do what Mother Sylvia "The Silver Shark" wants him to do. Instead of catering to high-profile wealthy clients, Gibson chooses to serve the "down on their luck" sector, earning him the nickname Community Lawyer. His career might implode before he has the chance to open his dream law firm, but come hell or high water, he's going to get his newest client divorced so she can start a new life.

Vanessa swears she's ready to move on, to be rid of Warren Jackson, but she's holding on to a piece of her past that she doesn't want Gibson to know. When he finds out, it could change everything.

What listeners say about Dinner at Sam's: A Ruby's Novel

Narration not great you never know who’s saying what so can be very confusing, would not recommend to a friend.

I am glad that I read Brunch at Ruby's first, since this book is a continuation in a sense from that book. Characters that we were introduced to in Brunch at Ruby's were more developed in this book. The story flowed perfectly and I felt like I was watching a movie. I love how Gibson and Vanessa developed throughout the story. Felt like I knew them personally.

Better Than I Expected!!!

It was a little shaky there for a minute with Dinner at Sam's. When I first started listen to this book, I was pretty bored with it. But, it eventually picked up where I could actually start to get into it. Vanessa and Gibson got on my nerves. I just didn't understand why she didn't want anything from Warren's shady behind. They were together for 12 years and married for 8 years so, she more than earned her fair share of his money. But, she was insistent on wanting child support only from him. I rolled my eyes and called her all kinds of stupid throughout this entire book. Gibson wants to be a champion for the little people but, he acts like it doesn't understand it takes money to be a champion for poor folks. I completely understand why Sylvia rode his butt the way she did about his billable hours because, he wasn't bringing in any real money into their law firm. But, as much as these two worked my last nerve, I loved them as a couple. Theirs was an innocent kind of love. Gibson didn't judge Vanessa because she use to be a stripper which, is something she worried about when they finally started dating. Matter of fact, he was kind of here for it when he found out. I went into Dinner at Sam's expecting not to like it but, it turned out to be a pretty good read. The storyline moves at a pace that doesn't necessarily keep you entertained but, it keeps you interested in what's going to happen next. And, the sex scenes were a lot spicier than I was expecting. Whew chile! They definitely had me clutchin' my pearls. I'd recommend you add this book to your TBR.

Can someone say dumb ass. Vanessa’s unwillingness to do what she needs to do to make her divorce happen and to make sure her daughters receive the child support they deserve is totally ridiculous; not to mention the resentment she has towards the fortunate and fear of people looking down on her for a past profession; which she did willingly. Not to mention the reason given by husband for blocking divorce. The narrator repeated a couple lines, but so do I when reading sometimes; she did a good job for the most part.

This was a really good story.....I love Gibson's love to help the community....he can from a very prominent family and he had to totally different perspective on who he wanted to help....he didn't practice law for the money....in fact, he did it to aid the community, which is how he met Vanessa...the development of their relationship was very interesting....I so enjoyed this story.

What a sweet story. You don’t really need to have read the first book, Brunch at Ruby’s, but it helps when you hear the character overlap. I thought Vanessa and Gibson’s love story was sweet. I enjoyed seeing it unfold.

This is just an awesome Love story. This is a story that could truly be real life. Narrator excellent

I really wanted to like this book. It had a great premise with a woman struggling against the odds to raise her two girls with a father dead set on being as unhelpful as possible. His lies and deceit propelled Vanessa into taking action and you can't help but cheer for her.

I took issue with this listen in chapter 10. Right at the 12 minute 39 seconds remaining point, Vanessa is telling Gibson her life's story and mentions that she worked at Red Heels, a strip club. However, in chapter 12, at 22 minutes and 7 seconds remaining, she tells a friend that Gibson does not know she was a stripper. Vanessa's background is a huge plot point and to have an absolute contradiction this early in the story is just too much for me. I stopped listening.

Note to the author: I submitted the actual times in the audiobook that contradict, Perhaps those can be fixed for future listeners.

This was a good read. Love story with a little bit of drama in it. I was surprised Gibson didn't have more drama going on with him, but it was still good.

Dinner at Sam's was my first book from DL White and I was extremely pleased. Dinner at Sam's was a moderately paced steamy love story between a lawyer from a prestigious family Gibson and his client Vanessa a down on her luck real estate agent. While working her divorce case Gibson becomes enthralled with the beautiful woman and secrets are discovered. This book was a great listening experience the narrator did an amazing job showcasing the different characters. This is a love story where two people from two different worlds finding love. I look forward to more books from this author.