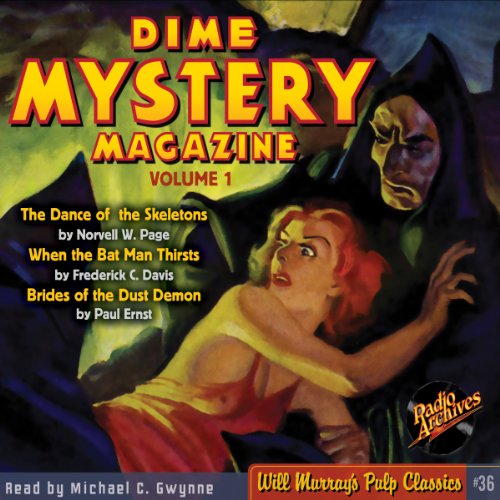 We here at Radio Archives were pleasantly surprised when, with more than a smidgen of trepidation, we released our first Terror Tales audiobook last year. It was a hit, as were a slew of Terror Tales eBooks we subsequently released.

We thought: If customers like this brand of retro-horror so much, why not go back to the dark well from which it all sprang? That meant Dime Mystery Magazine, the pulp that started the Weird Menace sub-genre back around Halloween of the horrific year of 1933. Since we were planning on celebrating the 80th anniversary of Popular Publication's G-8 And His Battles Aces and The Spider during this autumnal epoch, why not do the same for their sister publication?

In brief, Popular Publications had a foundering title in Dime Mystery Book. It featured lead mystery novels with an emphasis on the sinister and the suspenseful. But readers shunned it. Instead of canceling the magazine, Popular dropped the word Book from the title, booted out of the feature novel, and ramped up the terror and horror.