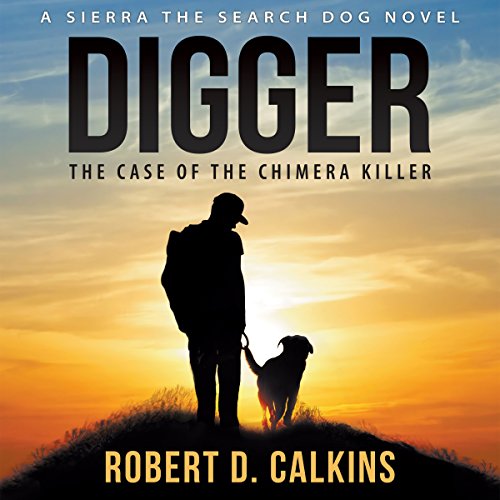 Digger: The Case of the Chimera Killer

Digger is the latest from Robert D. Calkins in the Sierra the Search Dog series of books for all ages.

Bryce Finn started out using his golden retriever Sierra's nose to win at childhood games of hide-and-seek. Now 17 and Washington state's youngest SAR dog handler, Bryce and K9 Sierra are hip deep in a series of murders that some political leaders deny is happening at all.

Bryce and Sierra continue to be one step behind whoever is dumping bodies, and one step ahead of detectives from their local sheriff's office. As the body count grows, Bryce risks his career, and eventually his life, to unravel the case of the Chimera Killer.

Along the way Bryce meets and nearly loses his first love, and learns the manly art of saying "yes, dear" at all the right times.

What listeners say about Digger: The Case of the Chimera Killer

Great dog adventure book, with lots of accurate dog handling insights weaved into the story. It is a book with a lot of heart. I will read all the Sierra Search Dog books available.

I really like this story of Sierra and Bryce it develop nicely it's not overly detailed at the same time it has lots of twists. the narration is a teeny bit robotic but I got used to it after a while and it did not hurt the story. I'm looking forward to another story with Sierra and Bryce.

need to get better narrator

I almost returned this book because the narrator was horrible. But story was good. He had no feeling when reading and no voice changes for characters and no pauses so couldn't tell when her went to next paragraph. He was horrible.

I enjoyed the story but the reader nearly ruined it for me. No matter how low I turned the volume it sounded like he was shouting in my ears. In addition he didn't use any inflections or voice changes to distinguish the characters, which was fine, except he ran the sentences together and it was often difficult to tell who was speaking. He also didn't pause between abrupt scene changes making it momentarily confusing and distracting.

Sierra, I'm dog crazy and I love to learn about working dogs.

As above as well as sounding like he was reading to very young children. This book seems aimed at teens and above yet I was insulted with the attitude that came across. I love children's stories and have listened to many over the years and have never experienced this feeling of being talked down to before. If the story hadn't held my interest I wouldn't have finished it.

Do you think Digger needs a follow-up book? Why or why not?

The author indicated it was a series and I look forward to further adventures in dog rescue and crime solving but if it's the same reader I'll be downloading them to my e-reader not listening.

Great story, I look forward to many more, I live in western Washington and love SAR dogs.

Loved the story. The reader has a clear voice but there was no inflection in the reading. Took away from the book a little. Think I would rather have read instead of listened.

I loved this book! Gripping! Wonderful story line! This is a ^don't miss it! " read!

Another book ruined by the narrator.

What disappointed you about Digger: The Case of the Chimera Killer?

What could Robert D. Calkins have done to make this a more enjoyable book for you?

chosen a different performer, if he had the choice.

Who would you have cast as narrator instead of Bill Cooper?

Almost anyone could have done a better job. My choice would be Dick Hill.

A great introduction to working dogs

A great plot line. Things get thicker as the story progresses. It is also a lot of fun to hear about how the working dogs do their jobs.