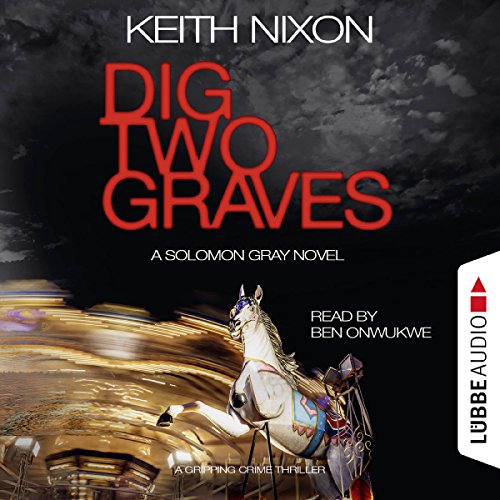 By: Keith Nixon
Narrated by: Ben Onwukwe
Try for £0.00

Was it suicide… or murder? When teenager Nick Buckingham tumbles from the fifth floor of an apartment block, Detective Sergeant Solomon Gray answers the call with a sick feeling in his stomach. The victim was just a kid, sixteen years old. And the exact age the detective's son, Tom, would've been, had he not gone missing at a funfair ten years ago. Each case involving children haunts Gray with the reminder that his son may still be out there - or worse, dead. The seemingly open and shut case of suicide twists into a darker discovery. Buckingham and Gray have never met, so why is Gray's number on the dead teenager's mobile phone?

With his boss, Detective Inspector Yvonne Hamson, Gray begins to unravel a murky world of abuse, lies, and corruption. An investigator from the Met is called in to assist, setting the local police on edge. And when the body of Reverend David Hill is found shot to death in the vestry of Gray's old church, Gray wonders how far the depravity stretches and who might be next.

Nothing seems connected, and yet there is one common thread: Detective Sergeant Solomon Gray, himself. As the bodies pile up, Gray must face his own demons. Crippled by loss but determined to find the truth, Gray takes the first step on the long road of redemption.

Set in the once grand town of Margate in the south of England, the now broken and depressed seaside resort becomes its own character in this dark detective thriller. "Dig Two Graves" is the first book in a series featuring Detective Sergeant Solomon Gray. The crime series is perfect for fans of Ian Rankin, Stuart MacBride, and Peter James.

About the Author:
Keith Nixon is a British born writer of crime and historical fiction novels. Originally, he trained as a chemist, but Keith is now in a senior sales role for a high-tech business. Keith currently lives with his family in the North West of England.
©2017 Bastei Lübbe (Lübbe Audio) (P)2017 Lübbe Audio
Police Procedurals Crime Thrillers
Show More Show Less

The book is just fantastic. Rare to rarest to find wonderful heart kickin' compassion in a crime novel. Solomon is a true keeper.
-- Ken Bruen, author of the "Jack Taylor series"

Amazing... cant wait for the next in the series

I struggled to start to get into listening to this but that was mainly I think as was so different to my last Audible both in the story and the voice. I loved the character of detective grey and cant wait to see him develop. He has been through so much and though can seem abrasive because of this you can tell it is due to being hurt. This is one of the very few detective stories where I was surprised by one of the culprits and ending on cliff hanger I just know it wont take long to start the next one!

DS Solomon Gray is a man haunted by the mysterious disappearance, ten years ago, of his six year old son from the ghost train at a fair. Five years after that Sol’s wife committed suicide. In this book Sol has to investigate the death of Nick Buckingham who falls from a 5th floor window. He was the same age as Sol’s son would be.

I really enjoyed this well written police procedural which had plenty of twists and turns to keep me listening, and I didn’t guess ‘whodunnit’.

I felt a bit sorry for Sol, even though he’s self destructive, belligerent and not that likeable. He has suffered so much heartbreak. He has quite a complicated relationship with the rest of his team, who were all portrayed very realistically.

I’ve never been to Margate but Keith Nixon paints a vivid picture of a seaside town in decline. It feels dark and depressing, a little like Sol himself.

I’m looking forward to listening to the next book in the series, Burn the Evidence, and I hope it continues to explore the disappearance of Sol’s son.

Don't judge me, but this isn't the first time I've listened to Dig Two Graves; it's my second. Also, I've read the book about 3 or 4 times, (OK, 6 times, but who's counting?). But I have a really good reason, honestly, gather round and pay attention because I don't want everyone to know. The reason I've read and listened to Dig Two Graves by Keith Nixon so many times is because.....IT'S ABSOLUTELY FANTASTIC! Really and truly, you can't get better than this. Is Solomon Gray the unluckiest man in the world? I just want to help him. He doesn't seem to be inundated with good friends or any family and even though he's a borderline alcoholic, a curmudgeon and foul tempered, it seems to me that it's a defensive wall he's put up to protect himself from any more hurt. How he manages to stay sane when he has no idea if Tom is alive or dead is beyond me. Considering everything he's seen and suffered, his moral compass is remarkably stable. The action is fast paced, the characters are well drawn and credible and the location is unusual. Ben Onwukwe does a marvellous job, giving voice to Mr Nixon's excellently crafted, meticulously honed and thoughtfully placed words. Big, huge, ginormous recommendation to buy Dig Two Graves; the book and the audio version. Treat yourself right now; you can always thank me later!

I thoroughly enjoyed this book. DS Solomon Grey is a complex character with years of emotional baggage which he carries around with him.
As a result of this he comes across as a dour, irascible character who is not really liked by many of his colleagues.
Despite all this, Keith’s excellent writing style makes you want the best for Sol as he endeavours to solve the case of a young, apparent suicide victim.
At the end of a book, there is teaser, which leads you to believe there will be more to come from Solomon Grey!

Leaves you looking for the next one

Full of surprises and easy to listen to. Now I want to read more by this author.

Promising but not delivered yet

This good writer gets better I hear as this series develops. I think the narration style made the story and writing seem weaker than they would be if I read the book instead.
I noticed that there are no audiobooks so I have to read the next ones. I will for curiosity at least.

This is a story of Solomon (aka Sol or Gray) Gray's investigation of 4 deaths. He is an emotionally messed up British D.S. all of, an unlikeable person. He is also a dedicated &amp; insightful detective who uses his job to escape work on improving himself. The ploy used to make Sol a sympathetic character is the same one used in another modern detective series. That fact also detracted from this tale; a bit of been-there-done-that. The story bounced around between the present, 10 yrs ago when a major life event happened &amp; 5 yrs in between. The timing of the bouncing lacked flow &amp; apparent reason.
The story focused on 4 deaths, in total (they happened throughout the tale) along with a major event in Gray's past. Most of the story centers on Gray's investigation of the 4 deaths. There were some interesting work dynamics that intermittently created a bit of temporary interest just as the relationship between Sol &amp; Tanya, the owner of his local cafe. They didn't engage until the story was more than half over, &amp; engaged to a limited degree even then. But none of the other side characters added much to the story. Interestingly most of the characters were not described physically or, if so, minimally. I found that refreshing at least.
The guilty were hidden well. But it all wrapped up a bit too neatly except for Sol's reason for his private misery. That continues in the 2nd book in the series. Finally, the narrator was fine and made a mediocre tale more bearable.