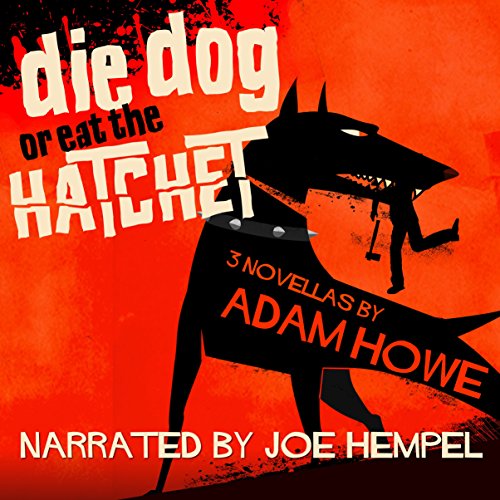 Carjacked and snatched by escaped mass murderer Terrence Hingle, timid diner waitress Tilly Mulvehill becomes the meat in a maniac sandwich when she and her kidnapper encounter the deranged Ritter twins, Dwayne and Dwight. As Tilly fights for her life, she soon discovers that sometimes the only choice you have is to do or die...to Die Dog or Eat the Hatchet. This pulpy Southern Gothic thriller takes no prisoners as it roars towards its gruesome conclusion.

What made the experience of listening to Die Dog or Eat the Hatchet the most enjoyable?

The writing is superb and the delivery by the narrator compliments the author's words to create a very enjoyable audio book.

The voices of the characters in each story. The author does a great job of creating very believable, very genuine characters, from the protagonists to the smallest of characters.

If I had to pick just one then it would be the finale of Damn Dirty Ape. But there are scenes in each of the three novellas that were very enjoyable. And the way the author structured the title story is brilliant.

I certainly laughed out loud at much of the inner dialogue of Reggie Levine in Damn Dirty Ape. And some of the more gross-out scenes in Die Dog or Eat The Hatchet even made me chuckle with morbid humour. Indeed, there are scenes in each of the stories that made me laugh. I think this is just the author's style.

These three novellas were brilliant. If you like Joe Lansdale's work, or if you just like pulp in general, then you are gonna love this. Dark, violent and very funny. The narrator was superb also.

This book is made up of three horror novellas, each with their own distinct stories/characters/theme. All three exceeded my expectations and, while definitely thrilling, were also quite hilarious at times as well. I'd recommend this collection to anyone who enjoys a fun, upbeat type of horror. Joe Hempel is the best voice narrator on audible!

I enjoyed 2 of 3 stories.The last one being the best.Joe Hempel is a fine narrator for all the voices needed.I was provided this book free by the author, narrator or publisher.

Three high-octane stories, written with careful craft and delivered with vitriol. A little Stephen King, a little Clive Barker, and a southern Gothic flavor. You'll have a skunk-aping, rat-chewing, alligator of a time. Highly recommended!

I was offered a free copy of this book in audio format from the narrator in exchange for an honest review.

When I heard that Adam Howe won the Stephen King’s On Writing contest, I knew I was going to enjoy this book. It is composed of three novellas, they are all horror but quite different from each other.

The high school football mascot, Boogaloo Baboon, has been kidnaped by what the people in town call the Bigelow Skunk Ape, the local Bigfoot. Reggie Levine, a strip club bouncer decides to rescue him, but in the way he will find a professional skunk ape hunter, which is also crazy and will make things more difficult.

Damn Dirty Apes is a mix of comedy and horror. Scary but also hilarious in a way that will not leave you indifferent.

DIE DOG OR EAT THE HATCHET

I think this is my favorite from the book, since it is really scary and when I though things could not get worse, they did. Psychopath Terrence escapes from the asylum and decides to strike again when he meets Tilly, a diner waitress. What Terrence did not know is that there are bigger psychopaths than him in the world.

This was scary, horrendous and very graphic. Is you want a horror story with lots of blood, gore and images that will stay with you for a long time, this is your story.

This novella was also very good, if you just overlook the stupid actions made by the main character at the beginning of the story. He accidentally kills his mistress’ husband and runs away to Louisiana, where he decides to stay at a bar where the owner keeps the largest alligator in the area. The barkeeper likes to feed his alligator with ‘special alligator bait’, also helping to make some problems disappear. Our main character falls in love with the barkeeper’s wife, and will have to try to avoid being gator’s food. The problem is, everything backfires here.

I liked the atmosphere created in this story, and the characters were more developed than in the two previous ones. It feels less scary than Die Dog, but here it is easier to connect to the main character and share his motivations, even if they are not the right ones.

They are three different stories, each one putting emphasis on a different aspect: Damn Dirty Apes is comical, Die Dog is raw fear and Gator Bait is a psychological horror story. I think there is a bit of everything for any horror fan.

One of my main motivations to listen to this book was that it had been narrated by Joe Hempel, since he is become one of my favorite narrators this year. He can interpret any character, capture the emotions from the narration, and transmit them increased to the audience. I know that I will be getting an extra bit if a book is narrated by Hempel. And I was right again.

A different type of horror stories.

Enjoyed all 3 stories in this book… Loved the gore! If you like that raunchy horror humor type books I would highly recommend! I loved it.
“This audiobook was provided by the author, narrator, or publisher at no cost in exchange for an unbiased review courtesy of Audiobookboom”

3 shorts that will leave you eager for more

The author wrote three tales that will have you wanting more. The 3 stories are not for kids as they are pretty graphic. As an adult I enjoyed them immensely. The 3rd was my favorite. I could easily see all of them as sci fi original movies. They would fit in very well. The narrator is one I am very familiar with and I have never listened to a book he read that I haven't enjoyed. I was voluntarily provided this free review copy audiobook by the author, narrator, or publisher.

What did you love best about Die Dog or Eat the Hatchet?

I loved Joe Hempel's narration in this book. He really gave the characters great personality.
The story is definitely not the genre I would normally read/listen to but I thoroughly enjoyed this work by Adam Howe.

Adam Howe has won me over with this story, I really look forward to listening to more of his work, hopefully narrated by Joe Hempel!!

Joe Hempel is one of my favorite narrators. His performance is excllent once again

There are 3 great stories in this book. My favorite story was the title of book, Tilly was great character. I enjoyed all 3 as this book contained gore; violence and good horror with some humor and recommend to all horror fans. The narrator was quite good. I was voluntarily provided this free review copy audiobook by the author, narrator, or publisher. THANK YOU

The only good thing about these stories was the narrator otherwise there is nothing but redneck humor and stupidity. The best story was the first one but it went downhill after that.