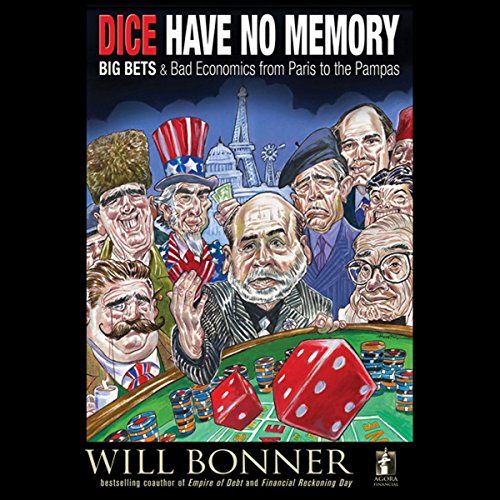 Dice Have No Memory: Big Bets and Bad Economics from Paris to the Pampas

By: Will Bonner
Narrated by: Will Bonner
Length: 10 hrs and 33 mins
Categories: Business, Personal Finance & Investing
5 out of 5 stars 5.0 (1 rating)

Dice Have No Memory: Big Bets and Bad Economics from Paris to the Pampas

Right now, Congress, the Fed, and the Treasury are all gambling with your future and your money. And it's contagious. Economies around the globe are suffering from the biggest multitrillion-dollar bets ever wagered on big governments and miraculous financial interventions in pretend "free markets." One man saw it all coming and told his readers well in advance of today's crisis. Bill Bonner reports on the true health and well-being of the world's largest economy to over half a million readers each day in The Daily Reckoning. His newsletter is to the mainstream financial press what the Gnostic Gospels are to the King James Bible. Back in 2000, Bill Bonner sounded like a prophet crying in the wilderness. While everyone scrambled to purchase shares of the latest and hottest dot-com, Bill announced his Trade of the Decade: Sell dollars, buy gold. Back in 2000, you could get an ounce for around $264. Today, you could pay as much as $1,400 for that same ounce. Finally, some of Bonner's best pronouncements, predictions, and profitable analysis are collected in one place. Dice Have No Memory gathers Bonner's richest insights from August 1999 through November 2010 to form a chronological narrative of economics in America. Here's a fraction of what you'll find inside:

Bonner's Dice Have No Memory offers elegies for economists, tips for investors, tirades against wasteful warfare past and present, and practical guides to modern finance with graceful prose, well-earned intelligence, and riotous irreverence. Bill Bonner's common sense genius rips the window dressing off modern finance - a world normally populated by misguided do-gooders, corrupt politicians, and big bankers empowered by dubious "mathematical" truths. The investing game is rigged, just like Monte Carlo. Instead of giving you magic formulas, this archcontrarian teaches you how to think clearly. And Dice Have No Memory gives today's investor the next moves he should make...before it's too late.
©2011 William Bonner (P)2012 Audible, Inc.