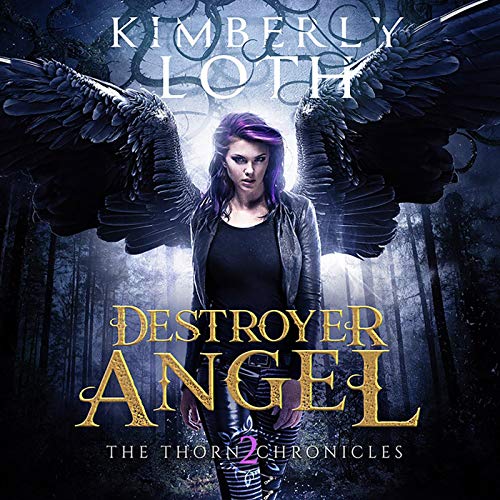 By: Kimberly Loth
Narrated by: Emma Lysy
Try for £0.00

In an ideal world, Naomi would still be living in Vegas with Ginny and Alejandro, kissing Puck whenever possible, and becoming a guardian. But Naomi's never lived in an ideal world. Instead, she's stuck back in Arkansas with Father, Kai, and the destroyers. Plus, her mother's power lives on inside of Naomi, and she has no idea how to get rid of it.

As Naomi struggles to understand the destructive power and help Kai with his role as the master destroyer, a new threat arises. Destroyers are killing guardians, and now all of Naomi's friends are at risk. Everyone thinks that Kai is the only one who can stop it. But Naomi knows better - she alone can end it all.

What listeners say about Destroyer Angel

Wow, that had some very unexpected twists. I'm not sure any of my words can do this justice, but let's try. The storyline was incredibly exciting and dramatic in places, some loveable characters in this one had very unexpected outcomes. And then there's the two main guys, choosing between them is impossible. Naomi had grown alot since the first book, you really see how much she's changed in book 2. The narrative is very good, and the new characters in this sound promising. I'm looking forward to the next book, this series is amazing and definitely worth reading.

Everything a second book in a series should be

Kimberley Loth picks up right where the first book left off and jumps into the action. This second book doesn't disappoint. There are several surprises I wasn't expecting and I found myself drawn even closer to the characters. I liked that there was more of the destroyer and guardian powers shown and we got to see what they are capable of. Can't wait to read the third book in the series.

Usually I only listen to audio books while I’m driving but this second book in The Thorn Chronicles was so good I had to listen to it when I got home as well. My only complaint is that it was over too quickly! On to book three I go.
I really love the paragraphs at the beginning of each chapter about the roses. It brings the story together so beautifully and there is always a connection to the coming chapter. These are great books. I love them. The narration was very good and easy to listen it.

Whoa, so much has changed for Naomi and she continues to grow in strength and character. I enjoyed seeing how Kai and Puck behaved in regards to Naomi. I was surprised that a particular characters returned and for spoiler reasons I won’t list why, but know that it was a good twist!!
The narrator, Emma Lysy did a fantastic job narrating Naomi and the other characters. It was easy to distinguish each characters voice and to follow along as well. I highly recommend the audiobook as I felt like the narrator truly elevates the book.
I’m looking forward to seeing what happens next in this world.

Naomi is back in Arkansas with her Father, Kai, and the destroyers as to help Kai as the master destroyer as she learns she has the control over the destroyers.

The beginning of this one confused me but in the best possible way. I was like wait a minute here... this is not how the last book ended. But once I caught on, it was brilliant. I'm pretty sure this book should be called Revelations because there were sooooo many! More of the old Guardian and Destroyer crews, plus a few new characters. I think I liked this one better than the first one.

This is an amazing story, and it's such a unique idea. Although some of the themes seem similar to other books, Kimberly Loth brings a fresh spin to all of it. I'm constantly wondering if I'm rooting for the right person or not (but in a fun way!). Highly recommend!

Disclaimer: I received a copy of this audiobook in exchange for an honest review.

I am really enjoying this series by Kimberly Loth. It is addicting and I am enjoying the twists and turns as they come. I cannot wait to see what happens next! The narrator does an amazing job of bringing the characters to life and I love how she differentiates each character.

A great addition to the Thor Chronicles. We start off right where the last ended and the story continues. Lots of emotions in this book and quite a bit inner strength with some twists you may not see coming. You will be burning the late night oils just to finish this book. Great listen.

In the second book to this series we see Naomi has gone with Kai back to Arkansas to help him and make sure he returns to the guardians. Things do not quite go as planned as Naomi is having a hard tome seeing her father and pretending that she wants to be there with Kai when she would rather be in Vegas with Puck. I love all of the different supernatural pieces to this series and I know book three is going to be just as amazing.

it was a great book. I like the references to different Rose each chapter. foreshadowing the chapter but only of you were paying attention