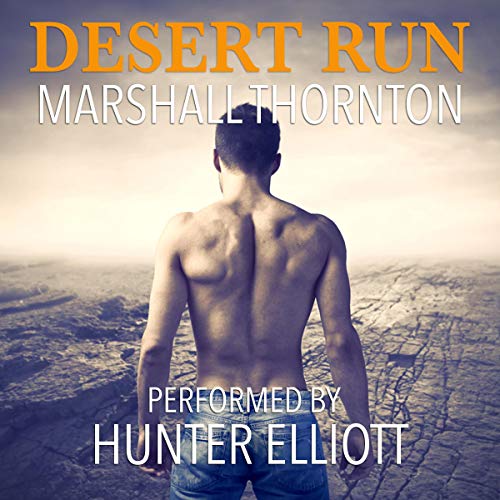 By: Marshall Thornton
Narrated by: Hunter Elliott
Try for £0.00

Palm Springs, 1973. Don Harris is a piano player on the run after killing a Chicago mobster's son in a bar fight. On the lam, he meets a pretty blonde girl in town for a convention. He lets down his guard and spends the night with her only to discover she's the younger sister of his best friend all grown-up. Foolishly, she tips her brother off to Don's location, and he's on the run again, hoping to find a safe place to land.

Out of money and desperate, Don accidentally walks into a gay bar where he allows a kid named Harlan to pick him up so he'll have a place to stay. As the mob chases them, Don begins to fall for the kid, putting them both in harm's way. Harlan has problems of his own, and Don knows he shouldn't get involved but he can't help but step in when Harlan gets in trouble. To save himself, Don's got to save Harlan.

What listeners say about Desert Run

A well written story with a great narrator.
I love how Marshall Thornton quickly brings you into a story.
The period setting made for a historical reflection on LGBTQ rights.
There was everything action, romance, humour and many forms of friendship and a fitting ending.
I will be looking out for the narrator Hunter Elliott again

An enjoyable adventure/thriller about a Vietnam veteran on the run from a Chicago mob boss in Palm Springs.
It has all the ingredients you want in a good thriller, a fast pace, action, hitmen and a love interest.
Hunter Elliott is a new narrator to me and I have to say he was excellent.
He brought each and every character to life, I hope to hear more from him in the future.

Really worth listening to

I thoroughly enjoyed this audiobook. The story was excellent and the narrator brought it to life.
Highly recommended.

Such an awesome book. Thornton writes such realistic men that I feel like his characters are my real life friends. More mystery than romance but what a great mystery. And excellent narration, Highly recommended

A Vietnam veteran's untreated Post Traumatic Stress Disorder get him in major trouble. And on more than one occasion, too! Marshall Thornton creates yet another wonderful character and this one struggles with a past mistake-no man can undo. However, the protagonist maintains a certain charm and optimism that made me smile at several points along with the book. The 'gay for you' romance in this story is endearing - it is definitely great reading but some of the content can be kind of tough, folks. I am so honored to have had an opportunity to review this work.