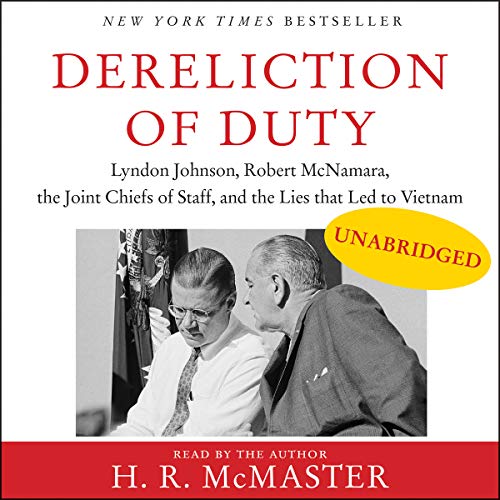 "The war in Vietnam was not lost in the field, nor was it lost on the front pages of the New York Times or the college campuses. It was lost in Washington, D.C." (H. R. McMaster, from the conclusion)

Dereliction of Duty is a stunning analysis of how and why the United States became involved in an all-out and disastrous war in Southeast Asia. Fully and convincingly researched, based on transcripts and personal accounts of crucial meetings, confrontations, and decisions, it is the only book that fully re-creates what happened and why. McMaster pinpoints the policies and decisions that got the United States into the morass and reveals who made these decisions and the motives behind them, disproving the published theories of other historians and excuses of the participants.

A riveting narrative, Dereliction of Duty focuses on a fascinating cast of characters: President Lyndon Johnson, Robert McNamara, General Maxwell Taylor, McGeorge Bundy, and other top aides who deliberately deceived the Joint Chiefs of Staff, the US Congress, and the American public.

McMaster’s only book, Dereliction of Duty is an explosive and authoritative new look at the controversy concerning the United States involvement in Vietnam.

What listeners say about Dereliction of Duty

On a par with "The best and the brightest"

A serious look at the hubris and miscalculation that led America into and then perpetuated the US involvement in the Vietnam war.

The book covers the period of time where Americans arguably lost trust in her leaders as the government narrative about the countries foreign policy veered further and further from the truth under the leadership of Kennedy, Johnson and Nixon.

The author is a combat commander who served his country in the Gulf conflict and was a military history professor at the United States Military Academy from 1994 to 1996 and attempted to serve his country as National Security Advisor in the administration of Donald Trump from February 2017 to March 2018 possibly putting some of the lessons of this book to work. Given the briefness of his tenure and the nature of his detractors I would guess he found a White-house somewhat more dysfunctional than the administrations he writes about with such damming hindsight..

If you have an interest in this period of history and found David Halberstam's "The best and the brightest" interesting then you should find this title equally engaging.

Lies and self deception at the highest levels of government. The deadly intellectual arrogance of Robert McNamara. Exclusion of dissenting opinion. All this led to the US war crime that was Vietnam. The entire sorry episode was predicted with uncanny accuracy both by a simulated war game and by one of the high level advisers (Green, I think) who was asked to take the other side of the argument, then ignored. A brilliant, forensic book and McMaster is also a good narrator.

The story was outstanding but the constant pauses the narrator made tricked my mind into thinking each sentence had a comma placed at the pause and I had to actively think through the listen rather than just absorbing the book as it was read. Can’t believe an audio book made it out like this without those unnecessary pauses removed.

The detail and organization were what I was looking for. However the reader’s phrasing was very difficult. Pauses in the wrong places and not where they should have been.

A Compelling Indictment of America's Leadership

Turns out the Vietnam Vets we're not only disdained by their countrymen, they we set up to fail by their government. A must read for every American, with the hopes that this experience never happens again. The level of detail, the insight into the personalities of those involved, and the continuity and clarity of events, as complex as they were, was masterfully reported by McMaster.
As I finished the book, I wept for only the second time in my life -- the first was when I first saw "the Wall" in Washington, and this time, after reading "Dereliction of Duty", thinking about all those young men who perished and those who struggle today --- for what. The Country deserved better, but those who served and died, and those still struggling today --- they paid the ultimate price.

A very fine and important book. And very well researched and written. From a Vietnam veteran.

A General Speaks Truth to Power

The author most recently served as National Security Advisor to President Trump departing after just one year apparently over differences with the President. This book is a detailed analysis of what when wrong in Vietnam from the perspective of a highly educated US military officer who was not a decision maker at that time. The focus is on the period of 1962 to 1965 and while very detailed it is also very repetitive. But if you want to get riled up (again) over the handling of the Vietnam War this is the book for you. The author is the narrator. His performance as a narrator is unpolished but sincere. It’s worth the read.

A thoroughly detailed and well-written book that all military and national political leaders should read.

How did we ever lose the War in Vietnam? Let us count the ways. Who lost it for us? Here’s a list.

Depending on which book you read, there are a lot of people who were responsible for the deaths of 58,000 Americans in Vietnam. But this one really nails it, and even quotes them as they sucked up to LBJ, who is the one who is most culpable. Concerned with his re-election campaign more than the meat grinder he created, he continually lied to the American people and bullied his weak military leaders into looking the other way while the body bags were shipped home by the tens of thousands. And not one resigned so they could blow the whistle...only the CIA Director McCone. The author does a wonderful job of narration, keeping the energy flowing throughout.

under Lyndon Johnson (and predecessors. to a lesser extent) ...everybody lied about the Vietnam War

The person who was reading didn't do a good job. His reading style was a distraction for me. But the information was excellent delivery was poor. Truth has come to you ~

Must read for any student of history

This book is a must read for anyone who wants to know and understand the war in Vietnam. General McMasters clearly outlines and describes the deceitful, underhanded ways President Johnson, Secretary McNamara, and a silent Joint Chiefs got us into the war without approval or even informing the people of the United States or their elected representatives.