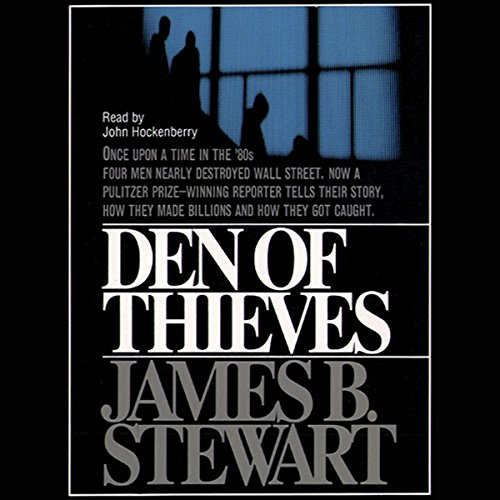 By: James B. Stewart
Narrated by: John Hockenberry
Categories: Non-fiction, True Crime
4.5 out of 5 stars

A number-one best seller from coast to coast, Den of Thieves tells, in masterfully reported detail, the full story of the insider-trading scandal that nearly destroyed Wall Street, the men who pulled it off, and the chase that finally brought them to justice.

Pulitzer Prize-winner James B. Stewart shows for the first time how four of the biggest names on Wall Street - Michael Milken, Ivan Boesky, Martin Siegel, and Dennis Levine - created the greatest insider-trading ring in financial history and almost walked away with billions, until a team of downtrodden detectives triumphed over some of America's most expensive lawyers to bring this powerful quartet to justice.

Based on secret grand-jury transcripts, interviews, and actual trading records, Den of Thieves weaves all the facts into an unforgettable narrative - a portrait of human nature, big business, and crime of unparalleled proportions.

Wish there was an unabridged version

Typically I do read or listen to unabridged versions of books. However, I wanted to listen to this one and, since it's a little different from what I normally listen to, I felt like the abridged version would be just as good.

And it WAS good, but I really wish there was an unabridged version! This felt too short to me; like I was probably missing some background facts. But, overall, I would recommend it.

Abridged version does not do justice

This is one of the great books, and the abridged books just doesnot build the story or the characters enough.

Well told, but only one side of the story

I enjoyed this, but, as is explored in books (and book reviews) elsewhere, this account is widely regarded as biased against certain participants, in a way many say is not borne out by the later proceedings and statements of such people as investigators and prosecutors. Some of it reportedly came from a witness singing to protect himself, whose account some other authors have taken issue with. I believe this book was based on certain limited sources and came out before all that was fully sifted out. For its sake, it is a good evocation of the era. The scandal, and some injustices allegedly done by zealous prosecutors, is mentioned in a couple of other major books about Goldman Sachs, one of whose execs was caught up in it. Michael Milken also has his passionate defenders who give quite a different slant on the story.

Also, like "Liar's Poker," I am disappointed that only abridged versions are here.

The story was quick and to the point before you know it, must follow from beginning to end

Would you listen to Den of Thieves again? Why?

inside look at legalized corporate gambling.