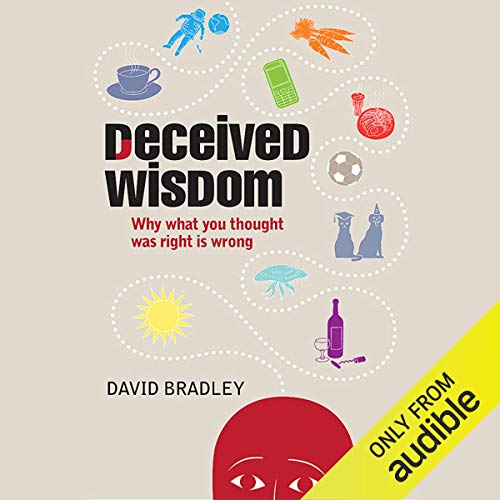 Have you ever been reminded to take off your coat indoors or you won’t "feel the benefit" when you leave? That what you need to cool down is a nice cup of tea? And that you have to let that red wine breathe to improve its taste? Tackling the facts we all think we know, one-by-one, award-winning science writer David Bradley’s clear and witty writing examines the science behind the statements to reveal why what you thought was right…is wrong.

What listeners say about Deceived Wisdom

Sooooo boring, despite a good topic

The style of writing left me screaming to rip my ear phones off. How can the narrator read out a long computer generated password: capital A, semi-colon, little G, inverted comma, capital Z, little S, ampersand ... twice? You know how natural scientists are avoided in the pub at university because they just don't realise how easy it is to bore normal human beings? Welcome to the natural scientists' corner. The Big Bang without the gags. Shame, because I really did want some of those promised explanations, but I can't listen to it.

If you haven't read much other debunking or popular science, or are not familiar with the various websites and blogs that clarify this kind of thing, a lot of this might be a revelation. I think it's especially good for younger readers, who haven't already heard most of this stuff. The reader who is less interested in the actual science and more trying to get some facts checked might have a good time with this.

Has Deceived Wisdom turned you off from other books in this genre?

The man's voice is pleasant and he mostly does well, but several times the emphasis within a sentence is a little weird - and does not support or clarify the meaning.

I was definitely disappointed - I got the book after reading an extract on the BBC taking apart the 10,000 hours of practice theory that Malcolm Gladwell has popularized. This was a nice piece of writing and dealt with something that has, at least in my little world, become a seemingly ubiquitous "fact". The rest of the book only rarely matched the standard of that extract. The title, apart from the annoying pun on the phrase "received wisdom" (which reappears dozens of times throughout the text), is misleading. "Why What You Thought Was Right Is Wrong" suggests that the general reader would probably believe, or once have believed most of the items in Bradley's list. But lots of these ideas, like the moon landing being faked, are only believed by a minority. Other's, "a watched pot never boils", and one or two other aphorisms that nobody takes literally, were just pointless. The omnipresent jokes are exhausting. I mostly felt that I wasn't learning anything - seeing other reviews and blurbs I think this book is meant to be "light" and "accessible" - maybe I went in expecting the wrong thing.

There are some things that were news to me in this book - bits of common wisdom that I hadn't really thought about before. But I'd suggest that a great deal of the debunking is already common knowledge (like that the common cold is caused by a virus, not by going out with wet hair, or that penis length cannot be increased by pills). I expected this to be a fun journey towards the truth behind various misconceptions. Instead I felt the author was often having to go out of his way to drum up increasingly rare beliefs to correct, and occasionally just parading through the obvious for no apparent reason.