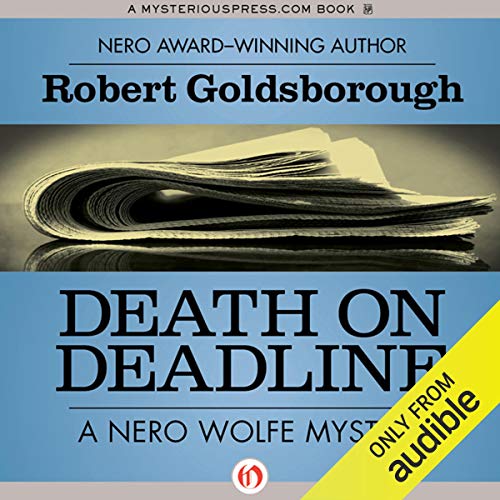 To save his favorite newspaper, Wolfe steps into the crossfire of a tabloid war.

Master sleuth Nero Wolfe’s small circle of friends is limited to his assistant, Archie Goodwin; his chef, Fritz; and Lon Cohen, the head man at the New York Gazette. Cohen knows more about the city’s power structure than any man in Manhattan, and for years he happily passed Wolfe information in return for the odd exclusive scoop. But now Cohen needs Wolfe’s help, for the Gazette is ailing and the vultures have begun to circle. Scottish newspaper magnate Ian MacLaren plans to gut the paper and turn it into a sex-filled conservative rag. Standing in his way is the company’s chief shareholder, Gazette heir Harriet Haverhill. But when the aged Ms. Haverhill dies in an apparent suicide, no one remains to resist the Scot’s advances except Wolfe. MacLaren may be fierce, but when the cause is just, Nero Wolfe knows how to play dirty, too.

Superb job! Nero and Archie are back!

What did you love best about Death on Deadline?

Robert Goldsborough has done something very difficult: picked up characters and continued a series after the death of the original author. Not the first to do so, but by far one of the best I've ever read so far! I have read all of the original Nero Wolfe mysteries (multiple times) and I am here to say, that it was very hard to tell "who" had done the writing during most of this book.

I should think that of all the series to have taken on, Nero Wolfe might have been a huge challenge because of all the very distinctive kinds of vocabulary, mannerisms, stylistic elements and so on that were the trademarks of the original series. Being off by just a little would have been very noticeable.

He has taken on the unimaginable task of re-creating the characters from the long Nero Wolfe mystery series--with all the same wonderful people (Nero, Archie, Fritz, Cramer and the rest...) and managed somehow to keep the same energy, atmosphere, subtle sense of humor, and framework in which the mystery is laid out--it's all there, and pitch perfect!

In this story, Archie and Nero work to solve the mystery of the suicide (which of course, only Nero recognizes as a murder) of a wealthy female newspaper owner. They go through almost the exactly predictable sort of interviewing of everyone in Wolfe's office (he will never leave his house)--with the same kind of grumbling, resistance--yet ultimately somehow cooperation--of everyone toward unmasking the murderer in the classic NW style ending. Wolfe spends lots of time with his orchids, Fritz cooks wonderful meals and Archie does all the footwork toward the resolution of the crime.

If I had the smallest thing to comment on that was sort of a negative for me, it would be that Goldsborough had understandably (I suppose) updated this book to a more recent time than the original Archie and Nero series. Hearing (only a few) references to a computer, "turning off the phones" and the like (I think it was written in the 80's--but sounded as though it might have been intended to have been late 70"s?--just my guess) was a little bit of a turn off, since the original series was (largely--but not entirely) written during the 40's, 50's and some still into the 60's.

Because of that, Goldsborough couldn't quite capture the feel of the original era in which these were (mostly) written. Nor did he try--since he constructed it as a book that would have been placed in the logical order of next in the series, coming after all that RS wrote. I don't know whether it would even have made sense to have tried to write this as something in the middle of the long stretch of time during which Rex Stout wrote all his books anyway. So that is really the most minor of things. And did not detract from the book--simply made me occasionally aware that this is "new," not one of the old, classic RS mysteries.

L. J. Ganser was a wonderful narrator. He so captured the essence of how (I think) Nero Wolfe should sound that it was just delightful to listen to him. He had the crisp-sounding, distinct clarity and intonation of his voice, one could almost hear the punctuation marks in his speech (just the way I think Wolfe would have sounded). I wish he might not have carried that crispness to other characters quite so much--since I believe that Archie and the others might have been a little more casual in their manner of speaking. However, as a listener--it was a bonus, because every word was clearly spoken.

All in all, this book was just a delightful surprise. A future listener should not hesitate to try it with a worry that the differences in writers might be too obvious. Where there are *slightly* noticeable differences, they won't detract from the overall feeling of having magically been brought back to the old brownstone with Nero and the rest.

I think that Goldsborough and Lanser have made a solid contribution to those who love the NW mysteries. Somewhere, I can't help thinking, Rex Stout is smiling and saying, "Satisfactory!"

Wonderful to have new stories with these great characters. However, there is an undercurrent of sarcasm in Archie toward Wolfe that damages the relationship between the 2 men. In the originals, while Archie openly found Wolfe annoying there was a profound fondness between the two. Certainly not Father/Son, but clearly they meant a great deal to each other.

New author but vary much the same people

I think Robert Goldsborough has achieved the flavor or Rex Stout’s well loved characters in this book. We read some of his first efforts and felt they didn’t quite make it. We especially enjoyed the feeling of meetings our old friends,as Wolf come to the rescue of New York’s finest, again.

The reader is disappointing

I gave Ganser a second try to see if he hit his stride. But all his characters still have nearly the same accent and manner of speech. I hope later editions have a different reader, or Ganser gets some coaching!

Rex Stout - whenever he ventured on the political or the ideological -- always made his own perspectives the servants of his stories. On this lierary score, Death on Deadline is DOA, a literary dud. Thus, Robert Goldsborough simply ruins any kind of effective suspension of disbelief on the part of the reader. Don't don't kill your time by reading Dead on Deadline. It isn't worth it.
-- Tony Royka

Goldsborough not worth reading

Goldsborough's writing leaves much to be desired. I wish Rex stout had written more. I definitely wish Audible had more of Stout's books available! all 70 plus of them.

What would have made Death on Deadline better?

I guess the new author does not think that anyone but liberals read books. Very anti conservative theme througout the book, much more so than the original cannon. Too bad, i like to listen and read novels for pleasure, not sophmoric liberal clap trap. Perhaps they should do a little demographic sampling. Just my opinion but I won't be buying any of the others.

What could Robert Goldsborough have done to make this a more enjoyable book for you?

Leave out, or at least moderate your political ideology. If you want to write liberal themed novels, fine and dandy, I was just disappointed the Nero Wolfe cannon has been taken over. I could of been pretty good.

What does L J Ganser bring to the story that you wouldn’t experience if you just read the book?

Not a Tom Pritchard but He's pretty good.

Greatly disappointed, I love the Nero Wolfe theme and wanted this to succeed.