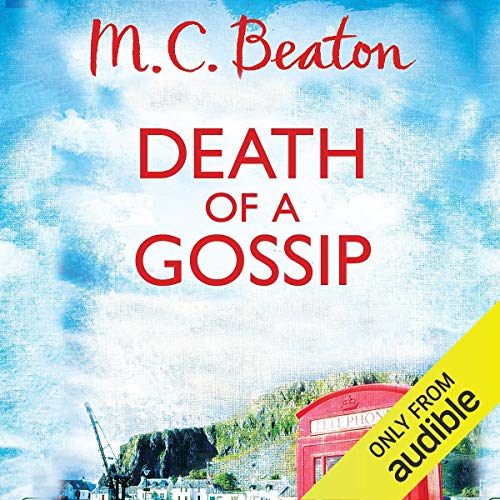 Death of a Gossip

Death of a Gossip

When society widow and gossip columnist Lady Jane Winters joins the local fishing class she wastes no time in ruffling feathers of those around her. Among the victims of her sharp tongue is Lochdubh constable Hamish Macbeth, yet not even Hamish thinks someone would seriously want to silence Lady Jane’s shrill voice permanently – until her strangled body is fished out of the river.

Now with the help of the lovely Priscilla Halburton-Smythe, Hamish must steer a course through the choppy waters of the tattler’s life to find a murderer. But with a school of suspects who aren’t willing to talk, and the dead woman telling no tales, Hamish may well be in over his head for he knows that secrets are dangerous, knowledge is power, and killers when cornered usually do strike again.

M. C. Beaton is the author of the best-selling Agatha Raisin series. She has also written several Regency romance series. She lives between Paris and the Cotswolds.

I got this because I had never 'read' M C Beaton before and I felt it might have some amusement value amid all the serious crime and thriller stuff I have been listening to of late. Having started I kind of felt I might just have made an error but, y'know, it turned into a really amusing hoot. Light, frivolous, but hugely enjoyable. Who knows, I may be back for more.

Back to the beginning

it has been a while since I read this the first in a long series of Hamish books and has a flavour of the classic murder mystery in its setting. A fishing school in a beautiful highland setting turns ugly and the star of the series Hamish uses his family contacts and various other wiles to solve the case and helps a liitle boy out into the bargain. This is not hard hitting but rather a cosy escapism with touches of humour. I personally like the little bit about the higland midges when getting coffee in spite of Lady Jane. The author has actually lived in Scotland and the Cotswolds where she sets her other series about Agatha Raisin so is writing about what she knows.

David Monteath is a perfect narrator for the Hamish MacBeth stories. It's not great literature, but these are decent whodunnits, in the old style: without excessive violence, or dwelling on sadistic detail. The murder victim is always unlovable, scunners everyone in sight, and there is a very traditional cast of suspects, in a circumscribed location, so that a denouement in "the library" or similar is possible. Easier to manage in rural Sutherland than urban Central Belt...
Sutherland is WEATHER, all the west coast Gulf Stream warmth, but without the shelter God granted to more southern counties of Ireland, the islands, and Kintyre to preserve us from hibernation and procrastination.
The residents of Lochdubh are usually innocent souls, guileless, or only sinful in a small way; incomers often bring foreign vices, snobbery, greed, but also additional income. The men of Lochdubh certainly need a shakeup, but unfortunately this series has not yet given them the boot in the b---s they need.
Still, easy listening, amusing, agreeably resolved novels, with recurring characters to love or hate, nicely told.

Absolutely relaxing . Could picture the highlands . Looking forward to the next one. Well done M C Beaton.

Perfect listen for times when you need something light to capture your attention , for a lazy afternoon or sleepless nights.

really enjoyed the story and enjoyed reading the original book, but unfortunately I didn't enjoy the narrated version that much

I understand the need for a backstory but morefishing information than murder mystery? ?

An odd book. The main character Hamish McBeth was not prominently featured and so difficult to warm to as insufficiently featured. As this is the start of a series I would have liked to have got to know him better.
The language used was at times out of context ...
Given the gentleness of the ambience, setting and mood of the book.
Won't listen to any more of Hamish.

A tense plot; a convincing performance or engaging characters - none of which were evident here. This was my first and definitely last foray into the work of this author.

What was most disappointing about M. C. Beaton’s story?

It was confusingly dated in detail and style, the characters were 2-dimensional stereotypes and the plot, such as it was, was thin and predictable.

To me, it felt as if he was as unconvinced about the story as I was. A lifeless performance.

this is the first book in the Hamish McBeth novel. It is an interesting story, but not at the standard of Agatha Christie or the royal spy novels. will Continue with number 2 and see how it goes.