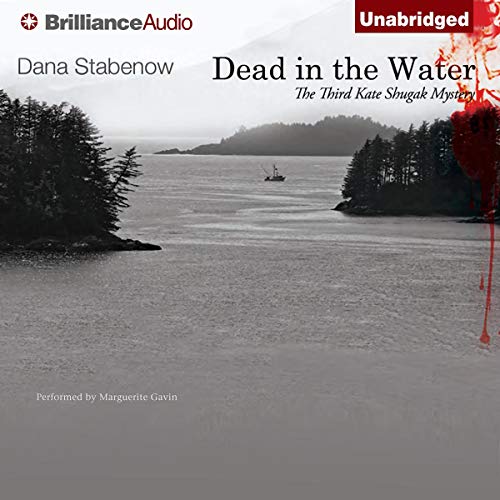 Dead in the Water

By: Dana Stabenow
Narrated by: Marguerite Gavin
Try for £0.00

Once, Kate Shugak was the star investigator of the Anchorage D.A.'s office. Now she's gone back to her Aleut roots in the far Alaska north - where her talent for detection makes her the toughest crime-tracker in that stark and mysterious land.

What listeners say about Dead in the Water

This is a really good book with realistic characters. Kate Shugak is intelligent and brave with the tenacity of a hardened soldier. The inclusion of Alaskan culture is an added bonus that adds to the convincing nature of the story.

The Kate Shugak books are usually credible, compact mysteries, set against a backdrop of some significant aspect of life in Alaska. "Dead In The Water" has Jack Morgan getting Kate to go under-cover as crew boat fishing for crab off the Aleutian Islands, to investigate the disappearance of two former crew members.

What follows is a vivid description of what life on board is like and an mystery with enough twist and turns and action and physical danger to keep everything moving along nicely.

For me the "whodunit" aspects of the Kate Shugak novels are secondary considerations, a frame for hanging the important stuff from. When the book is back on the shelf and time has passed, it's not the plot twist that stay with me but the vivid scenes of Alaskan life and what I learn about Kate Shugak.

"Dead In The Water" has several of these memorable moments: Kate drinking with a crew of Russian fishermen in a bar in the port, all of them trying to woo her in a semi-serious, larger than life kind of way; Kate's enounter with a young, deformed, Aluet girl who interprets life by using a storyknife to draw in the sand on the beach and her basket-weaviung grandmother who shares details of the history of her people and Kate's plunge into the freezing depths, trapped in a crab cage. All of these are told with a skill and an eye for detail that makes them real and compelling.

Kate is the centre piece of all of these novels. She is the reason I keep coming back. I this novel I got to see her as a woman confident enough of her own attractiveness and her own strength to spend time with the Russian sailors without feeling threatened by them or offending them. I saw the softer side of her in her gentle teasing of her young, over-enthusiastic Californian-surfer crewmate who loves EVERYTHING Alaskan. I saw the heart of her in her passionate relationship with Jack Morgan. I saw her again tracing the impact of her heritage and her culture in her deference to the elder who teaches her to weave and her affection for the young girl telling stories written in sand.

That is more than enough to make any book successful and is quite extraordinary for a short, crime-fiction novel.

I never imagined that I would fall in love with a series set in Alaska (hate snow and cold weather) where the residents are either fishing, talking about fishing or eating fish (not a favorite).

After reading and listening to the entire Kate Shugak series at least 10 times, I can honestly say that these books just keep getting better with time.

I can’t fully explain it - but I am a big fan of this series. Generally prefer @?home. Marguerite Gavin is perfect voice

The best of the first 3 books!

I began the Kate Shaguk mystery series recently so I have only read the first three. I love the Alaskan setting and feel it actually serves as a character of its own. And in this book we entered the world of crab fishing. It was a really great plot with all the tension needed to keep the mystery moving forward. Kate was in peril. Kate made new friendships. Alaska and its wether played a big role. The "bad guys" were really unlikable and the "good guys" were equally likable. It was good book. The only thing I wanted was more -- more book. The books in this series are short and I really wish they were longer.

It's a good thriller but a lousy mystery.

This is my first book involving Kate Shugak but I didn't have the feeling that I missed much. The prose is good but not exceptional, and the narration is acceptable but flat. The trouble is that I like mysteries more than thrillers, and this book has very little mystery. In my lexicon, a mystery is a story in which the villain(s) are not apparent, at least, not until very late in the story. A thriller is a story in which there is a great deal of action surrounding the protagonist, who either is in great danger or at a loss about how to track down the bad guys. A thriller can also be a mystery, but often the protagonist (and the reader) knows who the villains are very early on, and the tension is in the chase.

Since this is my first in the series, I don't know the author's intent, but I knew who the villains were and what they were up to long before Kate or her paramour and sponsor Jack Morgan did. There is a bit of a mystery about what happened to a couple of sailors, but, since we never encounter them, we don't really much care except in the abstract. Much of what Jack digs up late in the book could have been uncovered much earlier with only a little more research. I couldn't understand why Kate, who is neither a cop nor a detective, is willing to take such enormous risks, volunteer to experience such physical trauma, and still go back for more. There is the suggestion that she was partly motivated by the money, but that seems rather far-fetched, given her choice of lifestyle. Further, Jack seems to be essentially indifferent to both her physical suffering and the danger in which he placed her. He didn't have her back, and Kate had no way to call in the cavalry if things got out of hand--all very strange for a couple supposedly in love. Thus, I am left with mixed feelings about this book, but I'll probably read the next in the series, which is highly acclaimed by other readers.

Takes my mind off my troubles

Better than average—interesting story, excellent info on Inuit practices of weaving, story knives.
Though it’s hard to believe sometimes that Kate is fit enough to haul crab pots and work on a commercial boat And swim from said boat to shore and back in the dark frigid water And...the list is endless.
This is an entertaining read where evil gets its due and Kate lives to sleuth another day.

Listened to this book during my hourlong commute to and from work each day. Kate is a compelling character and this is a gripping storyline.

Alaska to the Core

The reader gets a lesson on Aleut history and tradition and a good look at the brutal fishing industry. That backdrop is often as much fun as the whodunit portion of the story, as was in this case. Sasha, an Aleut deformed by fetal alcohol syndrome, tells stories about the tribe's history. As always, a gripping story in a reasonable time, 5+46.