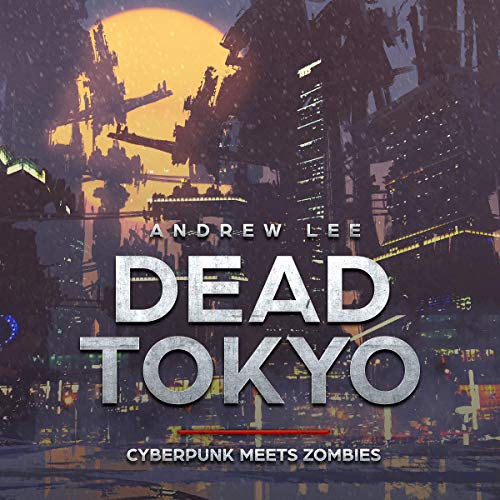 By: Andrew Lee
Narrated by: Daniel Meeks
Try for £0.00

The world of cyberpunk can be hard. It can be harder when civilization collapses.

All that is left is four kids and the entire population of Tokyo turned into zombies. Somehow these kids managed to not get infected by China's bio-warfare project gone bad. Luckily they each have their own unique skills that complement each other very well. Although they mesh well, it doesn't seem that way because they don't get along. They have completely different ideals they want to follow. Tensions rise and the rift between the group gets to big and puts everyone in danger. The rift between them actually lets zombies in.

Futuristic Tokyo was the furthest ahead in technology in the world. That all went down the drain when zombies are the only ones left to run the city. And they run the city for sure. They stay close together like pack animals and linger in the buildings. They are able to maintain a sprint as long as something they can eat is insight and they disregard anything that will hurt them. The human brains they once had has completely been taken over and destroyed.

James, Chad, Ashley, and Brad don't stand a chance against these zombies that are faster and stronger then them, not to mention that there are millions of them. How are they going to survive? Luckily they all had the same idea and head to the shipping port on the outskirt of the city. With water behind them and a good distance from the tall buildings they are at least separated from the zombies. Inside the shipping port building are two robots used by the workers to move shipping crates. Controlled by body tracking suits and virtual reality gear they are super fast and super strong. These robots give them hope and the ability to survive.

How will they fair against the millions of zombies?

What kinds of technology can they use to defeat the zombies?

Will the feud between the group sabotage their survival?

All your questions will be answered inside Dead Tokyo.

Get your copy today!

What listeners say about Dead Tokyo

Written by a 14 year old English student for an exam. I have PTSD from 'X says'

I love the Fallout series

I love the Fallout series and sure hope it's not over with yet. I'd love to find out what happened to Payne and if she's coming back for Mike and family. The narrator did an awesome job and read so fluently that I could really get in to the story.

I think I'm starting to tire of this story finally

.I think I'm starting to tire of this story finally. No doubt I'll get the next one because the characters are fun and narration always great, but I just didn't love this one as much as previous books.

I absolutely love this story

I absolutely love this story line that mark has created with the dark sarcasm vampires and other creatures of the night can't wait to see Mr tailbot on TV and hopefully in a movie .you should have Sean runnete play Michael would be epic

I have loved this whole series.

I have loved this whole series. Currently there is one more available. Book 10, which I'm about to listen to now! Afterwards Lee has other series featuring Michael Talbot and I plan on listening to them all! Plus anything else

What a roller coaster ride and there is no bad

What a roller coaster ride and there is no bad parts of this book. Sit back and live the life of Mike, BT and the rest of the family trilogies of horror, sadness, comedy and many more twist and turns of what it would be like if there was a Zombie world and add a few Vampires and of Course Iggy the ape. Do not turn of the lights and keep your weapons loaded

This zombie story gives you quite a glimpse

This zombie story gives you quite a glimpse into a future that is sure to make you think. I now know how to up my chances of survival (though I'm sure I would be the first dead in my zombie apocalypse group). It's fun, it is creative, and it makes for fun discussions between friends.

Love the zombie genre and listen to series

love the zombie genre and listen to series from Tufo, Shelman, O'Brien and it was Eric A. Shelman narrating that brought me here. The set up for this zombie event goes a totally different direction then any other books. It taps into current events to a certain extent

Zombies are simple; they like brains. They want to eat yours. There is no Edward, no Sookie no Angel, just brains. If you like apocalyptic fiction, this is a great use of an Audible Credit.

Well expalined. I like the narrator. The twist on the Zombie uprise is great. Great research on the military lingo.

neither cyberpunk nor set in tokyo

this review contains minor spoilers, but my goal is to stop you from reading this book, so I wasn't as careful.

I feel deceived. "dead tokyo: cyberpunk meets zombies" contains approximately one sentence which might be cyberpunk and nothing to establish the location as Tokyo. it almost seems like both those aspects were tacked on. if it's Tokyo, then why isn't there even one character with a vaguely Japanese name? no references to the city itself, the neighborhoods, the history... no Japanese at all. also, why does the Tokyo gun store sell dynamite and blasting caps? ridiculous.

I feel like the marketing for this book was deceptive. I was looking for Tokyo cyberpunk, not four teenagers arguing in a warehouse. I was quite disappointed.

also, this book has a cliffhanger ending if that bothers you. it doesn't bother me.

the performance was fine, a little monotone with little distinction between characters. the reader's consistent mispronunciation of the word compass was super annoying.

Misleading, What is this?

Honestly, I feel this is a generic zombie story set in an American city called Tokyo.
Spoilers Ahead

first off, the cast is all English/American. They're literally James, Ashley, Brad, Chad, Jenny, and Jason.
Next, the story doesn't make sense for happening in Japan. At one point they're going to "the gun store" not the police, not a yakuza stronghold, not even a shady pawn shop. Japan has some of the strictest gun laws in the world, how is there a gun store?
Third, aside from a pair of remote controlled robots, there is no cyberpunk. No data net, no plotting CEO or mega corporations, no AI or augmentions.
Finally, I'm not sure the zombies are even zombies, they're never really described, no references to decay or rot. In parts they appear to run, strategize, and communicate.
Are they mutants or zombies? This is not what I was lead to believe it to be.
If you want Cyberpunk or Zombies or anything Japanese... skip this one.

the idea for this is awesome but the writer completely wasted it, the story just randomly skips ahead and the characters have no depth

would like my credit back. characters are flat descriptions are almost non-existent. didn't even have Japanese names

I will be sure to keep an eye out for Andrew Lee and avoid all his work. The worst book i had the displeasure of listening to…

A good story if you consider the title.

I like a good traditional zombie story and this one took a bit of a turn, it was still a good listen.

I rarely take the time to leave reviews but this book is absolutely terrible. My first complaint is the Dead "Tokyo" portion of the title. Nothing in this book indicates that it takes place in japan or even Tokyo outside of the fact that Tokyo was mentioned as the city name. The fact that the characters names were Brad, Chad, Ashley and James really takes you out of the story considering those are traditionally white non Japanese names. My next biggest complaint is that the title mentioned a cyber punk theme that is non existent in this story. Aside from 1 single aspect of current world technology there was nothing to indicate that this was a cyberpunk setting.

Cyberpunk and zombies? Where's the cyberpunk?

Barely a mention of tech, but I think a worse problem is that in Tokyo we find 4 people with Western, white names - Ashley, James, Chad, and Brad. that's really a disappointment.

The writer seems to switch from past to present tense, but it doesn't hurt the story so much as the performance.

unexpected situations that lead the main characthers into a weird zombie surviving experience. try it! ít is a good zombie story.

I really enjoyed this book the explaing