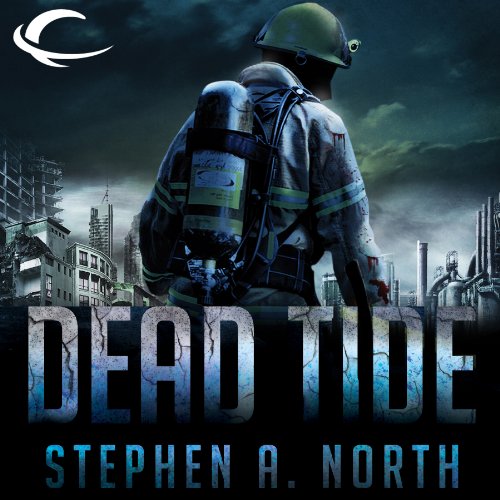 By: Stephen A. North
Narrated by: Brad Lawrence

Brad Lawrence gives an enthralling performance of Dead Tide, the first book in the apocalyptic series by Stephen A. North. He imbues each character with a distinct voice, shifting accent and tone with remarkable ease. In St. Petersburg and Pinellas Park, Florida, disaster strikes but it proves nearly impossible to evacuate. It seems the dead are reanimating, and they hunger for human flesh. Most residents watch the drama unfold on television rather than take action. Then the power goes out. Can they overcome their passivity and find a solution to their problems? Will they be able to rise above the death and destruction?

"There are no contingency plans for this!"

The dead are coming back to life, filled with a single-minded urge to devour the living. While the power was on, some people followed the bigger picture on television; but the news media is little more than a chronicler of the disaster. Sadly, most people are better at becoming part of the problem than finding a way to solve it. "The most important question becomes: Are there enough resilient survivors left to stem the rising dead tide of humanity?"

What listeners say about Dead Tide

I have no idea. Someone who hates plot or characterization might enjoy it, maybe.

Would you ever listen to anything by Stephen A. North again?

The reading was generally OK, except all of the characters were "voiced" the same. That voice was supposed to be "tough blue collar guy", but generally came out as "slightly retarded guy", I felt a bit sorry for the reader however because he didn't exactly have much to work with. None of the characters had any distinguishing features and the dialogue was pathetic, so the result was a kind of macho Forrest Gump.

No. The book was tedious. The characters were two dimensional and interchangeable, the plot was feeble (and bear in mind I love zombie fiction, I wasn't expecting much!)

Don't buy this unless you suffer from insomnia. Two hours into the book I still couldn't tell one character from another. Well, that's not quite true, there was the exotic dancer woman, the police woman, the cowardly 'bad cop' character and a whole bunch of other men who were entirely interchangeable. It was impossible to care less what happened to any of them.

Don't waste your credit or cash

Reader not very good, book not very exciting and none of the characters were particularly likable. Its just a standard zombie book no surprises.
Use your credit on a Mark Tufo book, new one on audible in October - read the whole series and stand alones - Great

I actually liked the style of writing, the present tense and the moving from one character to the next made for a reasonably paced listen.

My favourite charcter was Maurice, no Martin, or was that Morgan Blake :]

What does Brad Lawrence bring to the story that you wouldn’t experience if you had only read the book?

Narration does bring life to the characters and adds a depth you may not get through reading alone.

Would you try another book written by Stephen A. North or narrated by Brad Lawrence?

1st and last time I will ever read book by Stephen A. North.

Would you ever listen to anything by Stephen A. North again?

No, its poorly written with ludicrous characters

Who might you have cast as narrator instead of Brad Lawrence?

No one could make this book interesting, not even Bear Grylls sinking in a swamp.

What character would you cut from Dead Tide?

If I was Audible I would cut this book

Horrible, ludicus and tedius and thats after the 1st chapter. I only managed 2 more after that.

For lovers of all things Zombie!

Would you listen to Dead Tide again? Why?

I would definitely listen to Dead Tide again. The jumping between characters at climatic points made me want to listen longer. I would take this to the gym with me, I would find myself excersing longer just to hear what happened.

I really liked this story. I've read the book and have now had the pleasure to listen on audiobook as well. It's a great read!

Just couldn't get through it & that is rare for me

Can't really put my finger on it, wether it is the narration or the story or the two combined but I just couldn't get through the book! I rise to step away & listened to few other books then went back to give it another shot.. Just a all around stinker! Sorry! I don't like giving bad reviews but I wish if of had one to have warned me prior to wasting a credit!

Worst Zombie Book I have ever read!!!

People who like books with no plot or story line.

Has Dead Tide turned you off from other books in this genre?

A different person could have written it and read it.

Takes bad to a new low

Don't! This is so very bad! Where to start? Begins with the most effeminate yet excessively articulate group of soldiers in a firefight - it actually made me laugh at first then made me mad as it slipped down the well-greased slope of non-literature. Clearly the author had zero self awareness to write such gibberish. And this considering the low expectations one has when one actually likes zombie stories. So the written dialogue really can't be voiced well - but narrator bears a lot of this responsibility but in the end the story just stinks. Way too many characters, accents were uneven so in the end they all kind of sound the same. The story is limp, characterizations ala 7th grade English class and the dialogue is just unbearably bad. I kept hoping it'd get better but after listening to almost the whole thing I just had to write a review to spare listeners the pain, cost, and earache this causes. In sum, narration is bad, story is worse. I would so love to return this book.

Couln't get through it

The narration was very un-professional. Good attempt, but it sounded like something I would expect from a freebie from Libra-Vox.

The story was pretty good, but I couldn't finish it due to the bad narration.

Only If You are in Dire Straits

A better story and narrator.

What was most disappointing about Stephen A. North’s story?

The characters jump around a lot, and the book is actually boring. It did not have much going on, and I found it hard to focus.

He was not right for this particular story.

With all of the books coming out in this genre, you can wait on this. It is not horrible, but wait until you are finished with the MANY better books in this field!

Could not stand the narrators voice

I only made it about 10 minutes in before giving up, the narration is terrible.

Oh my what can I say. I just got around to listening to this and what a disappointment. Dry, cliche, dull characters, narration bland don't waste your credit.