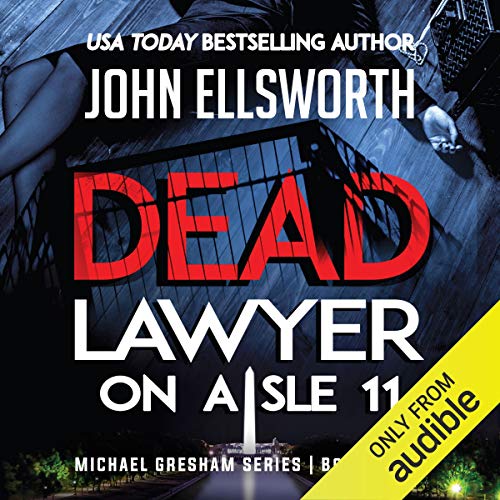 By: John Ellsworth
Narrated by: Stephen Hoye
Try for £0.00

Someone is killing off lawyers in the US Attorney's office.

Michael Gresham is assigned to prosecuting the case against the at-large killer. When Michael's team has tried everything else to find the killer, they turn to 12-year old Annie Gresham to create a criminal profile.

Annie, the savant daughter of Michael Gresham, gathers together all the known evidence and begins mining the data. The killer moves closer and closer to the investigators. Now everyone is a potential target, especially those who are getting the closest to making an arrest. Annie creates a shocking profile of the killer, leaving the FBI agents skeptical of Michael Gresham.

The noose slips around Michael, and he struggles to arrest the killer before the FBI turns on him. Michael is put on administrative leave. He retains Joy Heavens to come to his defense. Help comes from an unexpected source when Marcel Rainford returns from his work at Interpol and joins Michael's team.

In a shocking twist, the true identity of the killer becomes known - too late, for the jury meets and returns with its verdict. Marcel pulls out all the stops to obtain enough evidence to require a new trial. Video is purchased from an unexpected source and brought to court.

One day remains to file for a new trial and complete Michael's struggle to be free. Will the judge buy the shocking truth? Or is Michael's jail cell now his long-term home?

The legal thrillers are all stand-alones. If you missed book six, enough background about it will be provided in book seven that you don't miss anything. All books work this way.

What listeners say about Dead Lawyer on Aisle 11

In DEAD LAWYER ON ISLE 11, Book 8 in the Michael Gresham series, Gresham finds himself on trial for the first degree murder of a fellow Assistant US Attorney with whom he had a one night stand that left her pregnant. His adopted 13 year old savant daughter Annie plays a huge role in this novel as she did in Annie's Verdict. Compared to Annie's Verdict this novel is weak and it earns 3 stars rather than 5. Author John Ellsworth is an outstanding storyteller at his best, but he seems unable to write two 5 star legal thriller in a row. Book 9 in the series, 30 Days of Justis, is up next; it has received very strong reviews.

This book was difficult to listen to and not a very good story. I did not look forward to turning it on.

While most fiction are exactly that l, there must be something in a fiction book that is remotely plausible. This book had nothing that would lead anyone to believe that anything in the story, especially a child working in the USDAO was possible, the story was Unrealistic

Thoroughly engaging from start to finish. I had to put the book down at some points when I knew trouble was in brew. I was also surprised that the trouble was not what I had anticipated. I think they dropped the ball on introducing the profiler but not using her more. I also think all legal dramas should hire Tim Campbell to read. Just my prejudice.

had a difficult time listening to narrator.

struggled to complete book. started and stopped several times narrator was awful..no emotions were evident most of the time in this loooong story. several vital points were just mentioned and then were just dropped.

Intelligent and well written. Worth spending the time. I plan to experience more of the author's work.

Terrible narrative. His voice is so annoying. Really hamming it up so I could not finish the book