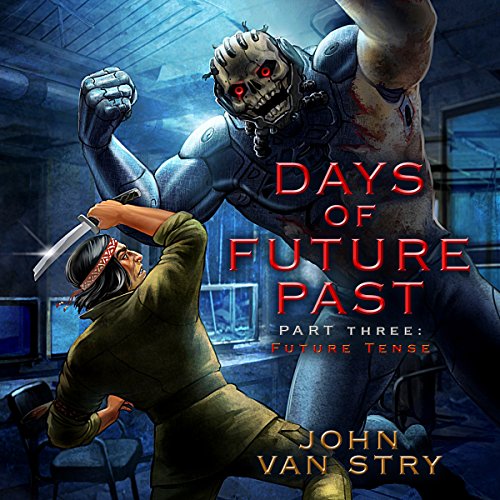 Since being brought forward in time to the post-apocalyptic wastelands of what was once his home, life has been pretty hard on Paul. Though it has had two good points, namely Sarah and Heather. But now, Coyote wants him to take care of the task that he was brought here to deal with in the first place: Aybem.

While it has always been clear that destroying Aybem is supposed to be Riggs' job, Coyote remains unconvinced that Riggs can do it without Paul's help. After seeing just what Riggs is capable of doing, Paul isn't as convinced that he needs to be there, but he also knows he's not going to get any choice in the matter.

And of course, just what does happen to you once Coyote no longer needs your help?

This is the last book in the Days of Future Past trilogy, a story of a young man brought forward in time because he came to the attention of Coyote, who thought that the gods' chosen hero just might need some help.

What listeners say about Days of Future Past - Part 3: Future Tense

The whole series had me chuckling and outright laughing at times. Well thought out logical story line. Doug was the perfect narrator for this series.

I loved it. I listend nonstop to the end. I just wish the dwarves and elves went to the moon as well. If you can write more in this universe.

yet another wonderful Van Stry story.he is easily one of my top three favorite authors.

I wish it didnt end I wish it would continue great author great narration. end

A solid performance and fun story

John Van Stry and Doug Tisdale Jr. have teamed up before and I really love the stuff they put out previously. I enjoyed this series. It has a satisfying ending but Stry set things up so he could easily travel back to this world.