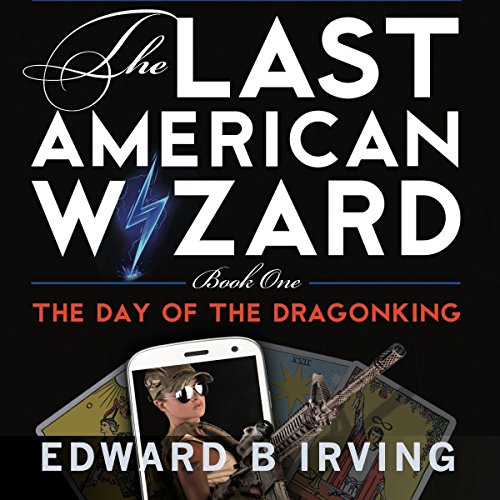 Day of the Dragonking: The Last American Wizard

Day of the Dragonking: The Last American Wizard

A trio of suicide attackers with magical abilities bring down a 747 by summoning a dragon to rip it from the sky, using the hundreds of lives lost as a sacrifice to initiate the Change. The country morphs into a new landscape of swords and sorcery. Now computers and other machines are coming to life, and regular people have started to turn into mythical creatures and forgotten deities, creating a chaotic world easily seized by whoever - or whatever - set this shift into motion. Hope appears in the nation's capital where, along with transforming Democrats into potbellied elves, Republicans into cantankerous dwarves, and Tea Party members into trolls, the Change has granted struggling freelance journalist Steve Rowan the abilities of the Tarot Arcana's Fool card, making him a powerful, yet unreliable, wizard. Realizing his potential, he is "hired" by the trivia-obsessed sentient computer Barnaby and coupled with the attractive, no-nonsense female Navy SEAL Ace Morningstar to uncover the puppet masters behind the plane crash. Irving (Courier, 2014, etc.), a producer of Emmy Award-winning news television and a journalist well-acquainted with the Beltway, makes good use of clichéd Washington stereotypes by mashing them together with fantasy tropes, breathing new life into political satire.

...Like many first books in a genre series, the novel foreshadows a greater enemy behind all this madness while barely hinting at its identity, offering a wonderfully bizarre consolation prize as its denouement.

A fun wild ride when the magic comes...

This book is an fun take o na new type of terrorist attack, one that brings magic back and changes everything. Filled with memorable characters and so much action Mel Gibson would be jealous, it will keep you up late at night, because you wont be able to turn it off. Bill powers does a great job bringing the individual characters to life, and keeping the story moving at a brisk pace.

I was given a copy of this book by the author free of charge in exchange for an honest review through Audiobook Boom.

And Now for Something Completely Different

This is a strange book. Seriously. It's part political satire and part "Metamorphoses." Reality and non-reality collide, and no one is the same as they were. (I recommend you read the various plot descriptions in other reviews.) The "wizard" of the title is a journalist, not a wizard, and is totally unprepared and disbelieving when he's informed he's the only person with the magical ability to save the world. There is lots of action, a healthy dose of humor, and I suspect a lot of inside jokes that went right over my head.

If you’ve listened to books by Edward Irving before, how does this one compare?

I have not. I thought his timing/spacing was good.

This book made me laugh.

I received this audiobook for free through Audiobook Boom for my unbiased review.

Folks, if you want to listen to a book that that will make you laugh, teach, and just flat blow your mind, this is it.

Magic comes back into the world through a plane crash that only 1 person saw. That starts him on a journey that he really does not want to take.He is a smart ass reporter that has more puns than I have ever heard. He is also a wise ass so that should tell you about the climate of this book.

Along the way, he is joined by an ensemble for quirky people straight out of Tarot cards and of course he is the Fool. So the Fool and his merry band take on the people that are trying to bring blood from everywhere in the world.

Great and fast read and keeps you wanting more all the time.

Different... but fun and entertaining

Just a really fun, humorous and entertaining book. Completely different and unusual in a good way. Not quite sure how to describe this book. Political satire, magical post apocalyptic, science fiction urban fantasy. However you describe it, it's worth a listen.

When you need a change from your usual listening preference or your just in the mood for something a little different this book will definitely fill that slot.

The world has been changed by a group of mystically powered terrorists and chaos ensues. The book synopsis tells you the gist of the story except for the fact that it's a really fun , quirky, enjoyable listen.

This is the first book by Edward Irving I have "read". I will definitely be continuing with future installments of this series.

This is the first time I have listened to a book narrated by Bill Powers. Fantastic job. Great character voices, and there are a lot of characters. Pleasant voice, easy to listen to. He was able to capture the humor and sarcasm of the characters. He doesn't just read the story. You can tell he put an effort into bringing the story to life. Really enjoyable to listen to.

This audiobook was provided by the author, narrator or publisher at no cost in exchange for an unbiased review courtesy of AudiobookBoom

Phenomenal power, held by a dunce

I really enjoyed this book. The characters were well written, and the storyline had the feeling of high fantasy while not being overly pompous. That's most likely because of the story pointing back to the modern world for both plot points and humor.

The narration was impressive, mainly because of the epic voice work. That being said, there were quite a few pronunciation errors that gave me pause, but I supposed part of that could have been typos in the original text. The one place where I didn't like the narration itself was in the conversation with the sphinxes. It was almost unintelligible, but that might have been the point.

Overall, I would highly recommend this book, and will be anxiously awaiting being able to listen to the next installment.

Interesting story, just not my thing.

Interesting story, but just felt like something was missing.

He got me on page one.

I fell in love with this book when I found out that the wizard's haunted Chinese knockoff phone wishes to be called "Send Money" :D

I adore quirky, funny and unexpected, and boy (or girl), that's what you're going to get in this book! In the beginning, a sort of magical cataclysm happens, and suddenly both humans and machines gain strange and fantastic new powers. What has happened? Not even the most intelligent one of them is sure... except maybe the guy from Roswell.

The Last American Wizard is a fast-paced book, with plot unfolding quite smoothly. Sometimes it feels like the main characters blunder a bit, yet arrive precisely where they need to - but I don't mind, and you probably won't either. The story carried me seamlessly and there was always something amusing lurking around the corner. It's a lighthearted book filled with action, and it looks like there will be sequels. I surely do hope so!

Edward Irving uses many mythologies here and weaves them together nicely. It reminds me of The Iron Druid Chronicles by Kevin Hearne in places. And as someone who has a Tarot course or two under her belt, I can tell you that Edward knows his stuff.

I liked Bill's performance a lot. His Barnaby is great and the voice he chose for Steve is spot-on.

Give this a listen, folks!

Would you consider the audio edition of Day of the Dragonking: The Last American Wizard to be better than the print version?

I did not read the print version - I definitely enjoyed the audible version and find that the narrator added a depth that I appreciate.

I liked: the creativity of the author; the cynical humor and snark of the Wizard; the teamwork; the conspiracy(s) - of course where one finds politics one will frequently find a conspiracy; I think what impressed me most was the incorporation of the Tarot into the intricate fiber of magic and mayhem.

Healing at the cemetery "...something Sphinx around here". And the bar. and the White House. Nope, can't find just one favorite.

Lots of laughter and relating with most of the characters.

I found it interesting that the Wizard was able to utilize his addiction - noted early in the book - to an advantage...and then get right back to meetings:)

The author did a great job of voices for the cast of characters and the Sphinx....well, the narrator's performance was alarming and repulsive...perfect for a creature made of stone.

The book and the narrator were a great match and hope to experience this duo again.

I made it halfway through chapter 6 before tapping out. The story seemed poorly written with bad dialogue. The narrator just didn't work at all for me as he sounded annoying to listen to. Hopefully other people will find it more to their liking or read the summary completely which I did not do.