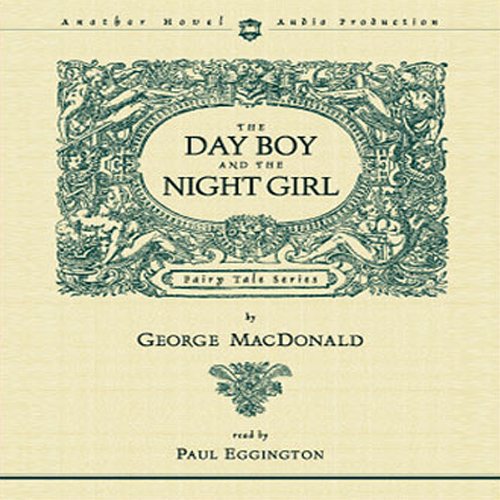 Day Boy and the Night Girl

By: George MacDonald
Narrated by: Paul Eggington
Try for £0.00

A witch's curse ensures that a boy can never wake at night nor sleep when the sun beams. Conversely, a girl is doomed never to sleep at night nor be awake during the daylight hours. Finally, a twist of fate unites them.

MacDonald's skill and imagery and grandfatherly style deliver a remarkable story that is accessible and light, yet acutely stirring and imbued with enduring value. Your capacity for imagination is sure to grow through this story that lifts our spirits and fills our minds with joy.

What listeners say about Day Boy and the Night Girl

This book is amazing!

This book is the best audio book I have downloaded of over 50 books. The writing is amazing, captivating and just plain beautiful. I would recommend this book to anyone who is into C.S. Lewis , and fantasy in general.

MacDonald has been credited with being the inspiration for other “Christian Mythmakers” such as Tolkien and L’Engle. Thid story in particular is seen as some of his best work. Despite the publisher, this is not a book that is about religion (but you can catch some religious themes as with the works with all the authors mentioned). The Day Boy and the Night Girl is a fairy tale of sorts, and I’ve heard that this is quoted in Ann Aguirre’s Enclave. Two women, a beautiful noblewoman named Aurora from the king’s court, and a blind, widowed woman named Vesper, are the unwitting guests of Watho, a witch, who aspires to know everything. She allows Aurora to live in the sunlight and have free range of the castle while she hides away the blind woman in the tombs, believing her to know no difference given her condition. Watho finds both women beautiful. Aurora in her vibrance and Vesper in her tragedy. Aurora soon births a son, Photogen. Immediatey upon his birth, he is spirited away from his mother. She’s told he is dead, and she leaves the mansion in despair. Not too long after, Vesper births a daughter named Nycteris and presumably Vesper died after her birth. Watho begins an experiment with the children. She only allows Photogen to see the sunlight, living as his mother had, and she allows Nycteris to see only the dark, living in the tombs as her mother had. Photogen is schooled in many arts while Nycteris is largely kept ignorant save for learning music. Photogen knows nothing of the night while Nycteris knows nothing of the day.

When Photogen decides that he has the courage to face the night after learning about it, he’s seized with a fear he’s never known, only helped through his fear by Nycteris who is ignorant of the sunlight and finds no fear in the dark. In fact, Nycteris is very much in tune with her surroundings. When Nycteris discovers the sun, she believes she is burning. However, unlike Photogen, she is more open to experience despite her naivety, and quickly comes to realize that, despite her fear of the sun, both the light and the dark live together to form a harmony. This harmony is something that both the boy and the girl find in each other, as they learn to balance this realization that there is more to their lives than the small world Watho has condemned to them for her personal knowledge. This is a beautifully crafted tale that’s aged well. There’s a simplicity to the story that kids can appreciate, but at the same time, there’s a depth that adults can admire. Photogen’s resolve to be brave in the face of the unknown and Nycteris’ quiet wisdom are shown beautifully, simply. They complement each other and navigate a world together that they’d been hidden from. Because this is a children’s story, things do wrap up very neatly for the characters, but there is still something affecting about it. Eggington’s narration was great. It wasn’t too over the top, and it wasn’t too boring. He read it just as you’d expect a fairy tale to be narrated. I will admit the story seems to give more weight to the boy’s story, but this could be to show how naive he truly is and how Nycteris offsets that by being compassionate. It made me think of Digory and Polly from C.S. Lewis’ The Magician’s Nephew, but Nycteris is much milder than Polly.

I needed a quick refresher on this old story for a project I was working on. Thank you for reading it to me, Paul Eggington. Hurray for multi-tasking!

A delightful short and sweet fairy tale! In George MacDonald's style he doesn't tell you he's illustrating something that can be learned from. But a reader or listener will more than likely pickup on the excellent theme. I recommend this story to children and adults.

Fantastic tale of learning to love!

"You're like live armour to my heart!"
My kids and I love this story on short road trips.

If you like fairy tales, if you like Lewis or Tolkien you must listen to Macdonald. The narrator of this particular book reads much too fast and I had to slow it down to .8x speed.

Highly recommended, this story is a lost classic. Beautifully narrated. Great for kids and adults.

Beautiful story for any age

The narrator was expressive, engaging the listener. It went with me on a short road trip

MacDonald is a genius but average work

I'm always amazed at MacDonald's fantasy writing. Here his genius bubbles often to the surface. However, the over all work is not one of his best and lacks a thoroughness regarding being full and complete.