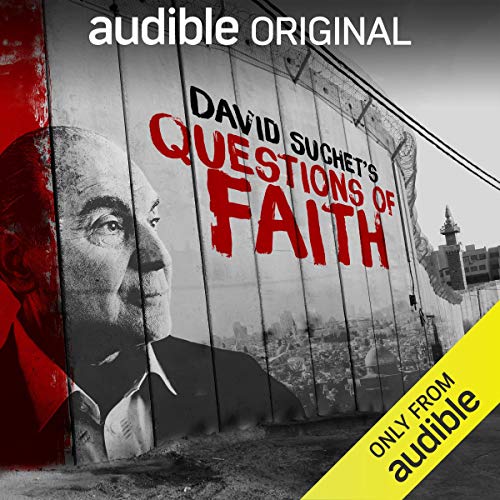 David Suchet sets out to establish what connects three of the world's major religions - and critically what divides them - as he travels the world on a personal pilgrimage of discovery.

Judaism, Islam and Christianity share far more in common than the abhorrent acts of extremists would ever suggest. When the roots of the three Abrahamic faiths are shared, why is it that they foster dissent, intolerance and disagreement? What unites them and what divides them? Is God a warmonger or a peacemaker? Why do some believers commit violence in God's name?

With the help of experts and former extremists, David sets out to answer these and many other questions.

From Jerusalem and London to New York and Northern Ireland, David investigates the motivations and twisted justifications behind religious terrorism. He reveals stories from inside high security jails and the minds of fanatics. He meets with leading scholars, survivors of extremism, reformed hate preachers and a whole host of contributors who might be able to help him get to the truth of why so much evil is justified in the name of God.

This is the story of how religion impacts society on many fundamental levels and sets humanity against itself.

What listeners say about David Suchet's Questions of Faith

I've just finished listening - "binge-listening", really - to this. I listen to a lot of podcasts and audio-series these days, including a good number of other Audible Shows, and this is one of the very best (in a very high-quality field).

As someone who works in the sociology of religion, and who has taken students on fieldtrips to Jerusalem, I can testify to this being an extremely nuanced and well-informed exploration of an important and fascinating topic.

More to the point though, it's just an excellent piece of audio. Suchet is excellent, naturally. And it's beautifully produced.

A message of despair but also hope

You can't help but be inspired by David Suchet's optimistic and sympathetic treatment of the topics and guests featured in each of the episodes in this series. We start on a journey to find out more about the three 'so called' great monotheistic faiths, namely Judaism, Christianity and Islam. This in and of itself makes compelling listening as often people have little understanding of what these faiths have in common. Its this starting point that then leads on to the broader issues of if peace is possible. if you have have even as much of a passing interest in theology and faith then you will benefit greatly from this series. You'll hear stories of tragedy and hope and you'll see how all kinds of different people respond to the ideas and theologies that have greatly shaped the western and Mediterranean worlds over the last 6,000 years.

As David Suchet is a Christian with a Christian mother and Jewish father he looks with insight into the 3 Abramic faiths. With comments from members of all 3 faiths against the background noise of a busy Jerusalem as well as a wealth of historical detail, it makes a thought provoking, enjoyable and interesting series. It uncovers many misconceptions of all 3 faiths that have caused so much division and heartbreak. I can heartily recommend it and David's velvet voice is the cherry on the cake!

Well worth the time

These 30 min segments are attempts to answer questions of faith among the branches of the Abrahamic family. I loved it, and am still contemplating much of the content. You will find yourself surprised and delighted, and all the while challenged to be better.

I love listening to David talk about religion. I hope that he does a part 2 follow up audio show!!

This is not my usual listen - I only listened to it because it was a free download. Politics and religion are not my usual unwind topics of choice. However I loved this series. David Suchet has such a calming voice and a non biased non judgemental approach to his work. He has a genuine respect for religion and his open mindedness oozed through to me. I learnt so much about the causes of 'holy wars' and the people that end up involved. It truly was a fabulous series that I will recommend to everyone.

A very man-centred view of religion.

I understand David Suchet Is a Christian but wanted to be fair to the other religions. To be fair to him, he is more balanced than most mainstream reporting, he even managed to show some positives in Pastor Steve Anderson, so thank you for that. And I understand you cannot do a cross-religion reportage and always come down firmly in favour of your own one, that would be churlish. But still I have misgivings. Most of the series seems to be about violence, terrorism and social divide and attempts to deal with it across and also within faiths, as if the ultimate benchmark of the value of our faith is whether it suits humans, rather than how they differ in the way a human being can be right with God. Why did Jesus die on the cross, and if the religions which deny this are all fine as ways to salvation, then was Christ's sacrifice necessary? When you spoke of the verse of the sword in the ninth Surah, you did not mention that this was a later verse from the Medina period which abrogates the peaceable verses written in the Mecca period. This abrogation argument is a key aspect to why the argue of militant Islamists is so robust against the Muslims like the Hamadi or that nice lady who appeared a couple of times. She said her study of the Quran led her to find a much more gentle form but this could only be done by ignoring the doctrine of abrogation. She was not challenged on this. I wish you would have a chat with Dr David Wood, Robert Spenser and a few others I could mention who would give a more scholarly rebuttal of some of the claims of Islam. They are often dismissed as Islamophobes but their arguments are based on theological issues and not on any personal prejudices against nationalities or ethnicities. The school prayer which appeared twice in the series, the second time around as its grand finale I found especially sad. It does not mention God, it subjects whatever His plans might be to the need of human peace and the "peace, peace, peace" at the end is more than a coincidental echo of the end of T. S. Elliott's Wasteland "shanti, shanti, shanti", which gave the game away that this is not an actual prayer from any Abrahamic faith but more like a Buddhist mantra. I commend as the perfect prayer the Lord's prayer as taught by Jesus Christ. In it we are taught to put the glory of God and his will first. We then ask for provisions and for forgiveness, and also promise forgiveness. For sure this leads to peace. However, what we learned from the Palestinian guy who forgave in the last episode is that he forgave for his own benefit, while Jesus would say we offer forgiveness to others because we also need forgiveness from God, which is subtly but vitally different. Great voice though. I am looking forward to starting his reading of the NIV soon.