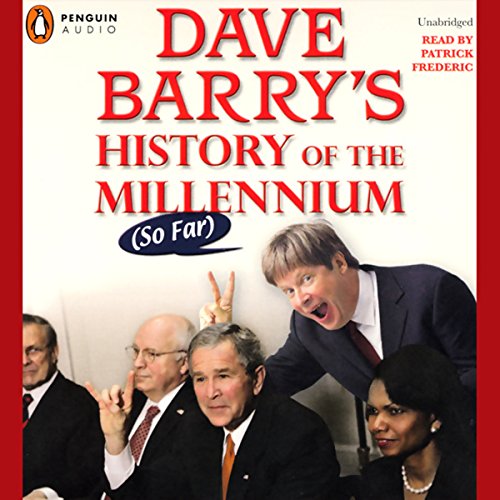 Dave Barry's History of the Millenium (So Far)

By: Dave Barry
Narrated by: Patrick Frederic
Try for £0.00

Thucydides, Gibbon, Tuchman, McCullough: to the names of the world's great historians must now be added the name of Dave Barry, who has taken a long, hard look at our new millennium (so far) and, when he stopped hyperventilating, has written it all down, because nobody would believe it otherwise.

In November 2000, the skies darken over Florida as hundreds of thousands of lawyers parachute into the state from bombers, while in 2002, the federal budget surplus mysteriously disappears ("Everybody looks high and low for it, but the darned thing is gone!"). In April 2003, no WMD have been found, but investigators do discover three barrels of lard, described by U.S. intelligence analysts as "a heart attack waiting to happen", while in 2004, an already troubled nation receives an even greater blow: the sight of Janet Jackson's exposed nipple. In 2005, Katrina, Cindy, Harriet, Martha, Valerie, Paris, Michael Jackson,(women just got crazy that year) while in November 2006... well, something happened; it'll come back to us.

Plus, an extra added bonus: Dave Barry's complete history of the millennium so recently (and unlamentedly) gone: Crusaders! Vikings! Peter Minuit's purchase of Manhattan for $24, plus $167,000 a month in maintenance fees! The invention of pizza by Leonardo da Vinci and of the computer by Charles Babbage (who died in 1871 still waiting to talk to somebody from Technical Support)!

Filled with facts and commentary that will amaze your friends and confound your enemies (yes, we mean you, Osama!), this is the book that will finally earn Dave Barry his second Pulitzer Prize. And about darned time, too.

This book has the same writing pattern over and over. A paragraph about a topic and then a humorous sentence at the end. It would have been great if it was a newspaper article in length. But its just too much to listen too for a whole book's worth of this type of thing.

Would you try another book from Dave Barry and/or Patrick Frederic?

I used to love Dave Barry's work - to the point that I'd be laughing out loud while other people were looking at my strangely. Unfortunately this latest work is just tired. It's the same old, same old. It would have to be another format for me to consider buying another of his books.

I'm listening to The Godfather now.I never got the chance to read it years ago.

The wry observations just got old. It just wasn't that funny and that's why I buy Dave Barry books - I want to laugh.

One of Barry’s best!

Dave Barry did a great job with this book. It is funny, fun and and a great Barry spin on history.

loved it. mighta snort laughed some. he is so freaking funny. great book. must have