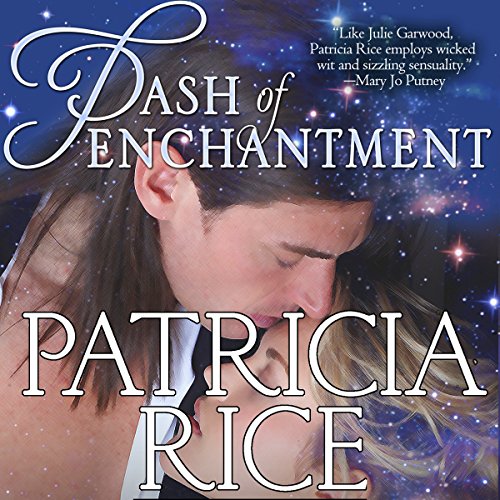 By: Patricia Rice
Narrated by: Jayne Entwistle
Try for £0.00

She was woman enough to tempt a saint - and lady enough to be dangerous...

Lady Cassandra Howard has frequented gambling hells as her father's lucky charm since childhood - but luck ran out along the way. Now, her brother intends to sell her into marriage with a wealthy, dissolute rake. Cass has done many things for her family, but this won't be one of them.

Her neighbor, “Saint” Wyatt Mannering, Earl of Merrick, has chosen a bride - one as proper and virtuous as he. But when lovely Cass attempts to trick him into marriage with seduction, he's almost tempted - except she's much too nave to be a seductress and his conscience won't let him.

By saving her reputation, he ruins her life. After a young man nearly dies in a duel attempting to protect Cass from her abusive husband, she flees to her burned-out home in the country - the estate next to Wyatt's, where she vows never to be dependent on another man, including the earl, who is rapidly losing his halo over his ravishing new neighbor.

What listeners say about Dash of Enchantment

The audible plus catalog romance section is very limited. So...I often find I listen to things that I know I won't love, but that will keep my occupied until I get more credits.
This was one of those audio books. Was it terrible? No. But it wasn't wonderful. Part of it was the how it was written and the character development -- they're very....Idk....predictable but in a superficial way. Cassandra just annoyed me, I like hey spirit, but how naïve she is to spend times in gaming hells, etc. and some portions of the plot just hit weird.
Lastly, the performance was okay. You could tell there were potions that were edited in as the audio was cut funky.
All in all, it was a solid Meh. If you want something mindless to listen to in the background, that you won't get invested in, this is the book for you.

Story would have been better if she had not been so stupid and then whining an out her stupidity.

The heroine is always creating a mess however, she does evolve and the love scenes are tender and tasteful. Easy to fall I love with this story.

NFL her books this is the best 1 I think. It had so many ups and downs of life. And hopes and dreams I've love

It was a good story but the main characters actions sometimes made me want to shut the story off…nevertheless I listened to the end typical rich guy meets poor girl and her problems are solved forever haha what an escape from reality.

too much for one girl!

too much heartache for one person to go through & come out sane! I get the angst & villains, etc etc. but the poor girl didn't even know where babies come from at 19. yes this was way back in the day but still. she basically grew up in a healing house & was friends with her late Father's mistress. Patricia Rice this was a let down to you magic series! even the ones that took place in similar time! write more of those! unfortunately I have to go through audible because it causes me migraines to read now.

Not big on the narration

For some reason, the narrator makes the heroines voice high pitched, annoying, and sounding like she's constantly laughing, even when it's not appropriate. In fact, many of the characters are given the same tone and inflection. I had to speed it up to get through it. I enjoyed the story, it was unique, but I won't be able to listen to this narrator again.

Another great story Patricia. Your imagination astounds me. 👍🏻
Jayne, you did a great job. I wasn’t sure at first but you truly pulled it off. Job well done 👍🏻.

Listen to the end

I dare you not to cry at the beautiful ending to this lovely story. This one will capture your heart.