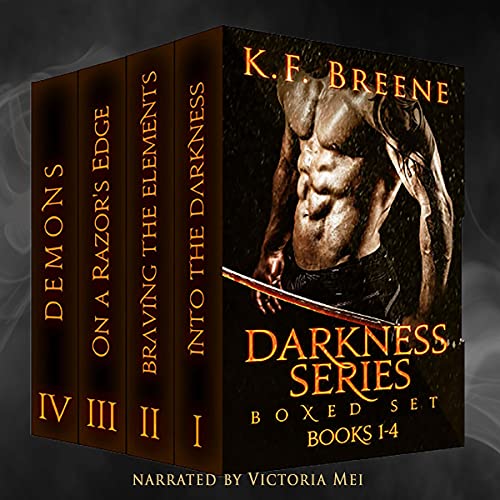 Experience the roller-coaster adventure as Sasha confronts a new world full of magic, mayhem, and love. Follow her journey from an orphan who lost everything, to one of the most powerful mages in the nation.

By Stefan's side, an alpha male who rules his clan with an iron fist, she will battle for her place as a Black mage, and leader's mate. This thrill ride will leave you breathless and begging for more!

Into the Darkness (Book One): Sasha has grown up with one surety: She’s not normal. She sees things in the darkness that no one else can see. Mysterious men cloaked in shadow, moving through the night. The problem is, pointing out invisible people is a fast track to a padded cell. Orphaned at age five, Sasha quickly learns an important survival tip: Keep her mouth shut and stay out of the spotlight. Until one night, everything changes. Suddenly, the men she was convinced were hallucinations, are very real. And very dangerous. As a new world opens up around her, she meets him. The Boss. An alpha leader who entrances her mind and tugs on her body. Primal and sexual, his people have a different set of rules. And they don’t always play nice.

Braving the Elements (Book Two): With a life goal of fitting in, Sasha hopes her strange abilities will finally make true friendship a possibility. Unfortunately, her magic doesn’t function like everyone else’s. What she thought would make her belong, sets her apart now more than ever.

On a Razor's Edge (Book Three): Life for Sasha isn’t getting easier. She has survived run-ins with monstrous Dulcha, lived through an abduction, and even made it past Charles’ constant badgering for sex. But if she thought the hurdles of this new life were behind her, she was dead wrong.

Demons (Book Four): It’s been a long road, but Sasha has finally claimed her role as the knowledgeable mage in history. She’s also acquired an incredibly grumpy bodyguard and a spunky new BFF. Things are going well until she comes face to face with Stefan’s troubled past.

The book that started it all!!!

This is the series that started my love for K.F. Breene books its gripping from start to finish.

I loved this box set. I find KF Breene's writing style to be exceptionally easy to listen to as it really draws you in. The stories/ books themselves are very short though & I would probably feel a little slighted if I'd used a whole credit on just 1 book. But I did get through this set in 2 days.

Wow! Very good series I listened all the way up to Jameson. Which is the last book in this series. My FAVORITE character is Charles AND his self titled book. Well Done! narrator did a great job through the read. Very very good. Narrator even added her breathy adlibs which heightened those intimate moments.

Overall the story line was good. It’s FANTASY! K.F. did such a good job with the “pairings”. I enjoyed the combining of different “species” and how they respected each others territory.

I laughed out loud a few four five times which got me awkward looks from co-workers and “what’s so funny” from my husband.
As I stated Charles was and is my favorite. He was by far the one who kept me laughing the most. I absolutely loved how he was the immature dope that matured and still maintained his easy going dopey personality all while doing what was needed when needed.

Jonus let’s just say he is my second favorite. Primarily because he is so damaged. Damaged to the point of pain. But you’ll have to read the book Jonus to know what that means.

You cannot help but fall in love with Sasha and the Boss. The RAW emotion and loved mixed with the sexual situations that they shared is something every woman dreams about. (In my humble opinion)

I absolutely loved this series, K.F. Breene does it again. I waited a long time before reading this series, to slowly go thru her books, savoring them, glad the Audible deal was offered the first 4 in a boxed set. Excellent narration by Victoria Mei.

I would highly recommend this series.

Nothing but sex scene after sex scene

Very weak storyline. It is basically one sex scene after another. And having a female do the male voices is awful.

I like K.F. Breeze but her other books are better.

Get Past Book 1 and Story is Great!

I enjoy K.F. Breene's stories and this series is good. I will admit, I was wondering during first book but the second book and on were worth it. Good story line and fun and many fun and likeable characters.

Not my favorite,... lots of spicy scenes tho :)

So overall I didn't NOT like it I guess, but after reading her Sin and Chocolate series, this one definitely pales in comparison. what I liked- The characters were all pretty hot and well developed and the plot was great,, and the story flowed pretty well... What i didn't like- There are a lot of dialogue issues that had me struggling to understand some of the things happening, and the spicy scenes were plentiful, but super super short. Overall worth the credit :) I don't regret reading it or anything, just wasn't my favorite of hers. Does want me to skip ahead and read about Jonas tho,... lol

This was just what I expected from a KF Breene series!! It was full of action, danger and characters that you instantly fall in love with! Add in her hilarious snarky sense of humor and it’s amazing!! Loved it!!!