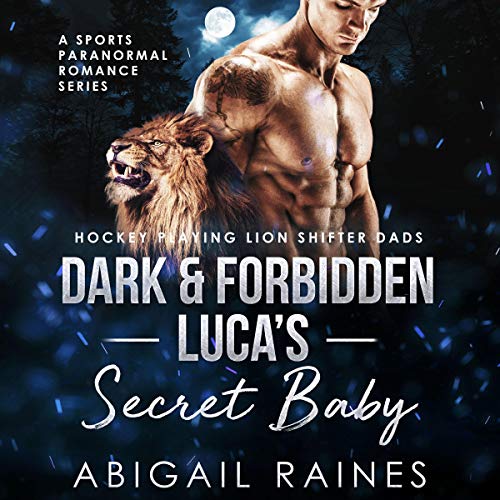 By: Abigail Raines
Narrated by: Dianne Boxworthman
Try for £0.00

As a girl from the wrong side of the tracks and the wrong lion pride, I’m used to scraping by.

It’s hard enough looking after my brother who’s going nowhere and my dad who started drinking when my mom died and hasn’t stopped.

But being under the thumb of Blake, a brutal alpha who won’t leave me alone, doesn’t make it any easier.

When I share one night with Luca, the captain of St. Dominic’s hockey team, The Cougars, and an alpha of a pride that has feuded with mine for generations, I think that’s all it is: One night.

Luca is kind, strong, and beautiful. He’s also way too good for me.

But then I get pregnant.

If I seek asylum with Luca’s pride, I can leave my sad, hard life behind and Blake won’t be able to say a thing about it.

It’s the perfect solution to all my problems.

Except that Luca isn’t the father...Blake is.

One lie and my life is fixed.

No one will ever know...right?

Warning: For mature audiences only. This is a stand-alone with a HEA ending.

Easy, quick read but not a fan of the narration.

Listened to audio narrated by Dianne Boxworthman. Her voice is very gritty and sometimes sounded bored during the narration, with very little dynamics. She also really aged Chloe, who's supposed to be a young woman but the narration made her sound significantly older. I'd recommend reading the story versus listening to the audio.

Chloe is a cougar shifter, trying to get by, taking care her little brother and an alcoholic father since her mother died. She struggles to get by financially and works hard to avoid a brutal alpha in her pack. She's poor and doesn't believe she deserves better than she has.

Luc is the captain of the St. Dominic's hockey team. He's well liked and respected and truly cares for his pack. When he meets Chloe in the bar, they end up getting hot and heavy. He knows she's going to become a part of his life. He just has to convince her that they have more than a one-night stand.

She will do anything to help her little brother, including having sex with Blake, an alpha she loathes. When she discovers she's pregnant, she lies to escape and protect her unborn baby. Luc is over the moon that Chloe is pregnant, but Blake won't let his rival win or let Chloe escape.

An easy quick, read but Chloe was hard to like and I wanted better for Luc.

I know that there have been several low reviews, but I liked this story. Chloe has always put her family members first, but no one has taken care of her. When Luca first meets her, he knows that she is his fated mate. But when she makes a deal with a devil lion shifter and then lies to Luca, she may ruin what they might have had.This is a story of loyal friendship, forgiveness, and finding true love. I felt that the narrator did a good job of portraying the emotions that the characters experienced. I recommend this Audible book.

The story was ok but I didn’t care for the narrator Also, had a couple glitched repeating a line throughout the whole thing

This book has a nice balance of pack drama and romance.
She will do just about anything to keep her family together and happy, but now she's pregnant.
He knew she was special the moment he meet her, but will she bring too much drama?
Standalone with no cliffhangers.

Let me start off by saying it is rare for me to not finish a book. I try to muscle my way through. However, the narrator's voice was unbearable. The female character is 26 years old however the narrator should like she's at least 40 and has been chain smoking for 20 years. I really wanted to like this book.

Maybe if you read the story?

Maybe if you read the story it magically becomes better? I couldn't get all the way through the audiobook I quit within the first third of it.

First off, the narration is horrible. I think the main character is supposed to be a young girl, but the narrator makes her seem like a middle aged woman who hangs out in trash bars all the time.

Second the story is ridiculous, sleeping with someone to get your brother on a team then lying to another about the baby being theirs so you'll be taken care of? It is 2020 women are past this.

I just couldn't do it.