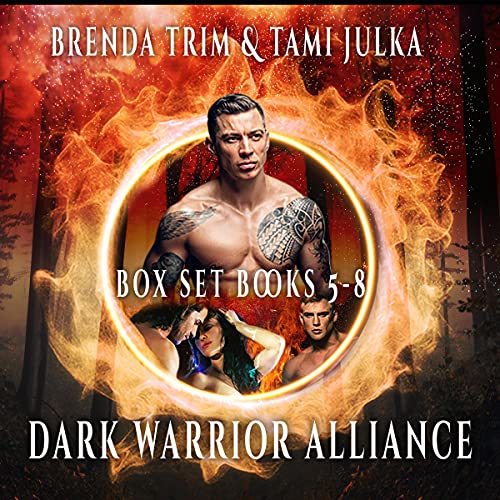 By: Brenda Trim,Tami Julka
Narrated by: Alex Black
Try for £0.00

If you like hot paranormal warriors who love their strong mates and are devoted to protecting the Tehrex Realm and humans against the dangerous and evil demons and their skirm, these books are for you.

Of all the Dark Warriors, Kyran Tarakesh is the most aberrant. Having witnessed the brutal murder and rape of his mother seven centuries ago, his sexual preferences are twisted and perverse. He walks the razors edge of control and he likes it that way, until he loses that balance and accidentally kills one of his lovers.

Suvi is the youngest of the Rowan triplets and prefers high heels to combat boots and parties to battles. Unfortunately, lately, she finds herself fighting more than she does drinking martinis. If she isn’t rebuilding the business she shares with her sisters, she’s searching for their archenemy, Cele.

Being a Dark Warrior and protecting others has been the only focus in Gerrick Haele’s life for centuries, until he receives the shock of his life when one of the females he rescues from the archdemon’s clutches ignites an arousal that hints at her being his Fated Mate.

Rhys O’Morda finds himself at the mouth of Hell after swearing he would never go back. When the archdemon, Kadir, steals the Goddess’ powerful Triskele Amulet, Rhys is left with the fate of the world resting on his shoulders.

"If you like J.R. Ward and Laurrell K. Hamilton give this book a look. It has a little bit of everything. Trim and Julka go from sexy vampires and shape shifters to deadly demons and fae, along with butt kicking sexy psychic heroines." (Paranormally Yours)

Paranormal Romance at it's best

I love immersing myself in the Tehrex Realm and the deadly warriors who protect humanity against the dangerous and evil demons and their skirm, I think it's great that Brenda's heroes are more often than not flawed and that sometimes they don't do the right thing but at the end of the day they find that they are worthy of love. There are twists and turns along the way and the path may be arduous but the voyage is worth taking. Although all the books are awesome I particularly enjoyed the story of the youngest Rowan triplet Suvi.

I received this box set for free in exchange for an unbiased review and would thoroughly recommend it to anyone who enjoys a well crafted sexy paranormal romance like I do.