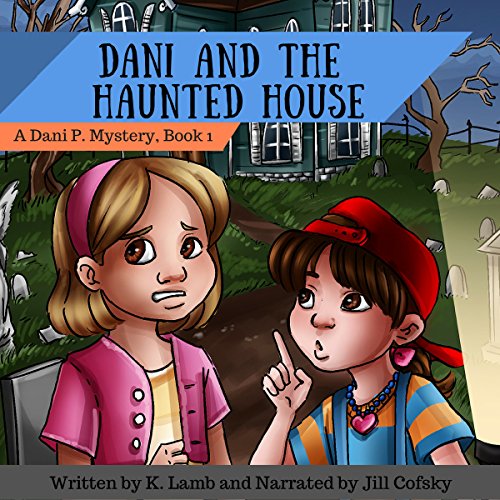 Dani and the Haunted House

Dani and the Haunted House

Dani shivers in the cold night air as her heart races and butterflies dance in her stomach. This is her big moment. She is out to prove to everyone that age doesn't matter when it comes to solving mysteries. With the help of her best friend, Chloe Marshall, she is determined to uncover the secrets within the walls of the haunted house on the hill. Taking a big gulp, Dani steps forward. There is no turning back now.

Follow the sleuthing detective, Dani together with her best friend, Chloe through a maze of clues before they solve the mystery of 'The Haunted House!' The lilt of Jill Cofsky's voice lifts K. Lamb's words to life from chapter to chapter, so much so that I can't wait to listen to Dani's next mystery adventure! Girls, sneak under your covers. You don't need a flashlight, just ears of imagination to be scared in the very best way!

What was one of the most memorable moments of Dani and the Haunted House?

The fire! Would they make it out alive?

What does Jill Cofsky bring to the story that you wouldn’t experience if you just read the book?

Ms. Cofsky keeps the characters’ speech distinctly different and her tone is a joy to listen to. She really brings the story to life.

I enjoy the playful banter that the characters engage in and admire their trust in one another.

An exciting listen for the young readers or for the entire family that’s filled with suspenseful shenanigans.

A wonderful children's mystery story. Easy listening with a great vocal recording. The vocal is soothing for young children yet intriguing for children of all ages. The story has high interest, great character development and excitement for all readers and listeners. A great bedtime story. Highly recommend!

Would you listen to Dani and the Haunted House again? Why?

Dani P. is my favorite girl detective since Harriet the Spy. She's smart, curious and not afraid to figure things out on her own.

What would have made Dani and the Haunted House better?

It would have been better if I could have liked the main character. Dani is a bully right from the start of the story. While I don't think the author's intent was to make Dani a bully that's how she came across. The summary sounded interesting but rapidly started to dislike Dani.

Dani was also too similar to another little girl who likes playing detective and it would ahve been better if Dani wasn't a more aggressive and younger version.

What could K. Lamb have done to make this a more enjoyable book for you?

Dani would need to be more empathetic to her friends. It would also be more interesting if this was Dani's first adventure investigating. I would have preferred a more likable main character. Dani's sidekick started out decent, willing to stand up for herself but she quickly and rapidly let Dani have her way.

She gave each character a different voice, I could hear the character's personality.

If you could play editor, what scene or scenes would you have cut from Dani and the Haunted House?

The last chapter. I can't explain why except to say that it was simply an outlet for Dani's ego, which is big enough when the story starts.

The summary lured me in. I'll give the next book a try but I'm doubtful I'll blow a credit on it.