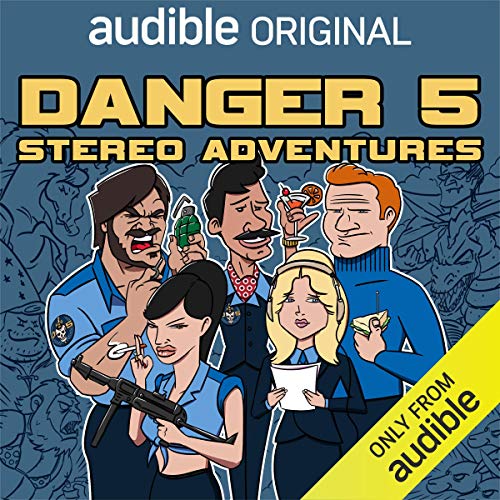 This series is hilarious for fans of the cult Australian TV show, but I'm not sure what anyone else would make of it!

This is bonkers, totally and utterly mad. I loved it, especially as I'm currently in hospital, bored and worried. Anything that can take you away when in my situation is priceless, being free made it doubly so.

The characters have all just stepped out of a cross between Boys Own and the Bunty comics of the 50s/60s. It reminds me of the excellent Ripping Yarns series with Michael Palin and other Pythons.

Highly enjoyable, completely insane and worth making more series of.

Thanks to all who had a hand in it.

An excellent wacky adventure, and the closest we are going to get to a season 3. Strongly recommend watching the TV show first though, not sure what you would make of it otherwise!

I’ve come to the Danger 5 table rather late, but I’m glad I found this little gem of a show. The stories are bonkers, surreal and the “adverts” are ace! Definitely not for everyone, but for me this was perfect to cheer me up in these troubled times. I’m now off to be really uncool whilst dancing the Fruity!

Brilliant to have the team back together!

It's been great having the Danger 5 team back together for this series - but it's really accessible to anyone who's not familiar with the TV show it's based on! I love the humour - it's bad taste without punching down and wonderfully surreal.

even being free I want a refund

this is terrible, I understand why it was free, story terrible, actors awful, out dated jokes (seaman) don't even bother with this

Couldn't ask for a better follow up from the TV series. I really hope there is a second season being planned!

This is so bad, it gets better than good.

At first I tried to make sense of it but w/o knowing the TV-series, and taking it somewhat serious at the start, I could not believe how corny this was. But when you let go of preconceived ideas and any expectations it becomes incredibly entertaining - especially the commercials are hilarious. Thank you Audible for putting out.

Danger 5 is one of the funniest shows of the past decade, and it's audio form is just as good. The show managed to combine the special effects of b movies and the thunderbirds with tight writing and hilarious acting. The podcasts are much the same but with the added twists that a non visual medium forces onto the actors. Simply wonderful work that always gives a sensible chuckle.

Go get her Jackson.

We do not deserve Danger 5. Loved the series. Love that they have returned. God bless us all.

I SAID SIT DOWN

...and listen to Danger 5. If you love the show you can picture everything and it’s just as amazing.

The fact that this isn’t more popular than it is, is frankly, a dastardly crime. It’s funny, it’s insane, you care about the characters, and you wish there was more. Sequel!

I truly appreciate this franchise. I genuinely wish there was more and I was so happy to find this.

next best thing to having the show

talented people that always bring a smile to my face. if you love the show its a must listen

I am dumber for wasting my time on this "story"

Very funny,, Non-stop action and comedy. I would recommend it to anyone with a sense of humor.

I was so excited when I heard that Danger 5 was going to be adapted to an audio adventure series that I subscribed to audible for this podcast alone, and have listened to it numerous times. I loved the show and Stereo Adventures doesn't disappoint. I just hope it's more than a one and done season. Please for the love of all that is holy, please make more!!!

Loved the show and I love this just as much

I wasn't sure what to expect from an audio version of the show but I was such a big fan of the original I had to check it out. I was pleasantly surprised to find that the nonsense worked perfectly for a podcast. They could say outlandish things without the need to visually show it, which really opened up the door for creativity. Also the twist in the second to last episode was one of the best. So happy this exists.

This series keeps the same voices, sfx, jokes and spirit as the tv(youtube) series!

I don't know if this is a good starting point for understanding Maroon 5, but it's a great continuation.

Even if you don't like audiobooks or podcasts, give this a listen.

Thank you so much everyone who came together to make this.
Danger 5 Forever!