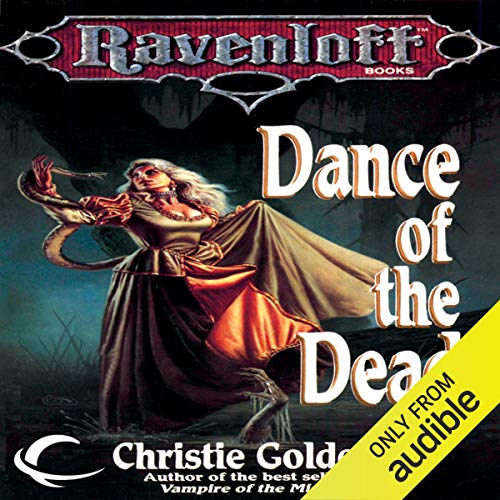 Dance of the Dead

Dance of the Dead

When the riverboat on which she works as a dancer docks at a zombie-plagued island known as Sourange, Larissa Snowmane must rely on the help of the swamp creatures to save her soul.

I loved this book in my late high school and early college years, when I was deeply involved in gaming in the same setting where the story takes place. It was then and is still my favorite of the Ravenloft novels of the time; Christie Golden does a nice job. Like most gaming-based fiction, it's not especially deep, sort of a Creole riverboat horror version of what would otherwise be termed a "fun romp." If that kind of accessible story is your cup of tea, I would recommend this one... in print form.

The reader is simply dreadful. On the positive side, she sounds as if she is enjoying the story herself, which is nice, but half the cast of characters come out sounding like Tiffany from Daria--slow and somehow breathy, but monotone and distracted.

A spark of talent shows when the reader gives a bit-part a rich French accent, but for some reason in this tale set against a Louisiana style Cajun/Creole backdrop this is the only time she makes use of this skill. I was left wishing repeatedly that a voice like that would return, and chuckling inappropriately whenever the Tiffany voice would return.

I was able to complete my listen because I knew the story and was looking forward to the poignantly satisfying big finish. If you are new to this story, I don't know how you take it seriously with this reader.

This is one of my favourite books. I have read it myself many times. The narrator did a Great job.

So, I'm listening to the Ravenloft books for nostalgia's sake as I had all of them when I was a teenager. I'm only part of the way through this one so I can't attest much to the story. I'm guessing from the fact that I don't remember anything about the book and the reviews that it could be rated as "meh" None of that matters though because the narrator is just god awful. While voice acting the characters it honestly sounds like she's slow I don't know how "PC" that is but it's as near as I can describe it in this review. I feel compelled to warn possible listeners but I don't want to be dramatic about it just know that I physically cringe as she acts out the voices of Dumount and Dragon Eyes or thus far any character that has a French ascent. That being said I don't really like to disrespect people and I'm sure Marisa is a nice lady IRL but I feel obligated to save people from making a poor decision in purchasing this audio book.

I love this book! I read it before a long time ago! I am finding it hard to get through this version because the narrators voice is so off putting

3 of 6 people found this review helpful

Would you try another book from Christie Golden and/or Marisa Vitali?

Christie Golden is one of the women who actually can write fantasy, so yes.
Vitali, the reader, is unbelievably bad. LibriVox-bad.

She reads in a bored automatic, something like a metal-robot voice, only worse. No voice-acting, very careful school-teacher annunciation of words, pauses in wrong places, very slow pace...

Could you see Dance of the Dead being made into a movie or a TV series? Who should the stars be?

The story is fairly standard horror fantasy. When the narrator is reading non-dialog she is rather pleasant, but some of the voices she attempts are halting and grating. I was tempted to stop listening after some long scenes with The Lady or Dragon Eyes dialog.

Not the best, not the worst

Would you try another book from Christie Golden and/or Marisa Vitali?

I have already read another Christie Golden novel and that's part of why I chose this one. Marisa Vitali has a lovely voice, and is an talented voice actress, though I feel she might not have been the best choice for such an ugly, despair-filled story.

Larisa, the protagonist, was my favorite character. She was treated to the whole "hero's quest" story arc.

Pace, yes. Tone, no. As stated earlier, I believe Vitali was a bit too... cheerful with her tone, even when things were dark. Nothing against her, I just don't think it clicked for me.

Do you think Dance of the Dead needs a follow-up book? Why or why not?

Nope. The story's over, and everyone can move on with their lives.

it was a interesting look at a I'd hero. The second half was the better half.