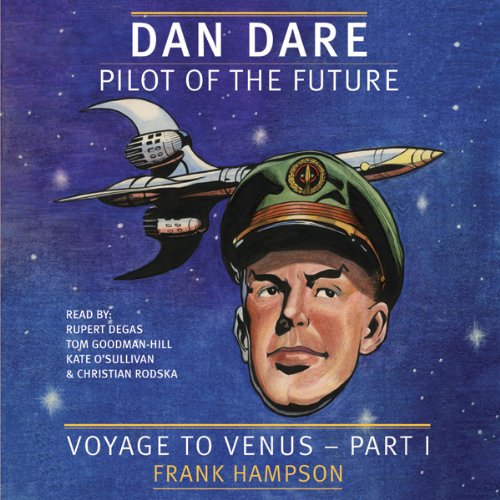 From the pages of the seminal British boys' adventure comic, The Eagle, comes the legendary Dan Dare - Pilot of the Future, created by Frank Hampson.

For the first time on audio, this thrilling debut volume comes to life with a talented cast and full sound effects. Dan Dare - Pilot of the Future was incarnated in the 1950s and was truly original in the world of comics. Nothing like it had ever been seen before. It was distinguished by its long complex story lines, snappy dialogue and outstanding artwork.

Remember The Mekon, Digby, Sir Hubert, Prof. Peabody, Hank, Pierre, Sondar and Volstar? Here they all are, jetting off on a thrilling journey that would be told for decades to come.

This first story, Voyage to Venus, sets the scene. Having arrived on Venus in the spaceship Ranger, Dan and Digby set out to find new resources to feed a starving Earth, but they are suddenly captured and taken to Mekonta, the capital of the Northern Hemisphere of Venus, and home of the Treens, the humourless scientific automations who rule the northern half of the mystery planet.

There, we meet the evil Mekon, leader of the Treens, and Sondar, who would become one of the "good" Treens. A deadly battle commences with Dan Dare and his crew eventually escaping back to Earth. But he is determined to return to Venus....To be continued!

"This is brilliant, original science fiction, paving the way for such projects as Star Trek and Star Wars." (Books Monthly)

Beware! Only half the story!

I'm going to ask for a refund for this, which is a bitter disappointment as its really rather good. The casting and sound effects are excellent, and the script is incredibly faithful to the original Eagle comic strip. The aggravating thing is that it really is just half the story, ending just as Dan is about to return to Treen territory to rescue his friends. Most of the action of the original story happens in the second half, which Audible don't have (and given that this was produced in 2008, probably never will). I feel somewhat cheated.