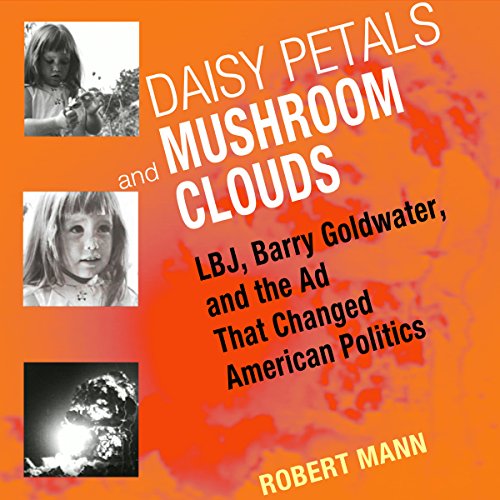 By: Robert Mann
Narrated by: Aaron Killian
Try for £0.00

The grainy black-and-white television ad shows a young girl in a flower-filled meadow, holding a daisy and plucking its petals, which she counts one by one. As the camera slowly zooms in on her eye, a man's solemn countdown replaces hers. At zero the little girl's eye is engulfed by an atomic mushroom cloud. As the inferno roils in the background, President Lyndon B. Johnson's voice intones, "These are the stakes - to make a world in which all of God's children can live, or to go into the dark. We must either love each other, or we must die."

In this thought-provoking and highly listenable book, Robert Mann provides a concise, engaging study of the "Daisy Girl" ad, widely acknowledged as the most important and memorable political ad in American history. Commissioned by Johnson's campaign and aired only once during Johnson's 1964 presidential contest against Barry Goldwater, it remains an iconic piece of electoral propaganda, intertwining cold war fears of nuclear annihilation with the increasingly savvy world of media and advertising. Mann presents a nuanced view of how Johnson's campaign successfully cast Barry Goldwater as a radical too dangerous to control the nation's nuclear arsenal, a depiction that sparked immediate controversy across the United States.

Repeatedly analyzed in countless books and articles, the spot purportedly destroyed Goldwater's presidential campaign. What is certain is that the ad ushered in a new era of political advertising using emotional appeals as a routine aspect of campaign strategy.

What listeners say about Daisy Petals and Mushroom Clouds