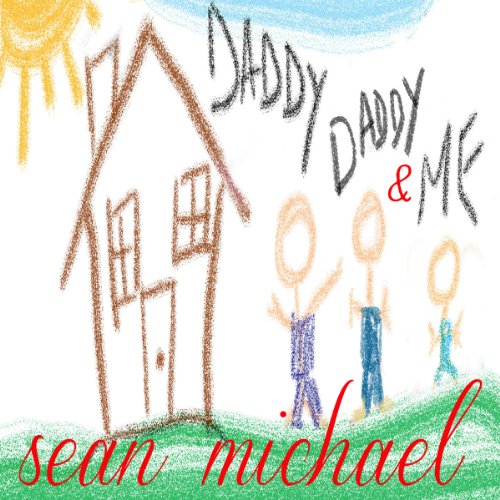 Daddy, Daddy and Me

When Jeff agreed to be the sperm donor to his best friend Beth, he never expected a tragedy to leave his newborn and three year old motherless. That's exactly what's happened, though, and it's totally thrown his life into chaos: his lover has left him, his house isn't anywhere near childproof and his boss feels the restaurant has been patient enough with the time off.

Donny has always known he wanted to be in childcare, and he just finished his degree in early childhood education. He didn't count on people being less than thrilled to hire him when they find out that not only is he a male nanny, but a gay one at that. Job hunting has been frustrating to say the least, so when he knocks on Jeff's door and is greeted by the sounds of things breaking and a pair of screaming children, he thinks, just maybe, he can begin this particular interview with a trial by fire.

Becoming the nanny to Jeff's children just might be a dream come true for Danny, and exactly what Jeff needs, but are either one of them ready to really be a family?

What listeners say about Daddy, Daddy and Me

If you could sum up Daddy, Daddy and Me in three words, what would they be?

The developing relationship between the two main characters

Which character – as performed by Thomas Hoffman – was your favourite?

Not much to choose between, but if I have to pick it has to be Donny

I both laughed and cried, but then again I am a romantic

If I have to have one criticism, I would have liked the story to be longer, but then again, like any good author always leave them wanting more!

This story is exactly as advertised. With the cover art, the blurb, and the audio sample you’ll have a great feel for what's inside. The only unanswered question is whether the bedroom scenes fade to black or everything is spelled out. With some sweetsie stories it’s the former, but in this case it’s most definitely the latter! Cover art aside, this is not rated "G" for listening with the kids!

So yeah, this is a m/m romance for people who love little kids and family life and want a sweet, easy listen. On the one hand this is nothing deep, but I appreciated the emphasis on supportive, everyday normalcy in a same sex relationship. The tone is heartily cheerful throughout, even in the bedroom come to think of it, and it works here. I usually reach for longer books but this fit nicely into its shorter space. I’d happily listen to the narrator again too!

I really like this m/m romance. I found it very realistic... down to the 3 year old's comments. I like the fact that the Don and Jeff didn't jump into a relationship right away. It progress naturally, and it was a good story dealing with Jeff's ex.

Narration was ok... I didn't like Don's voice originally but you get use to it.

I typically enjoy Sean Michael's novels, and Daddy, Daddy, and me is no exception. I am a huge fan of m/m novels that showcase a man's ability to maintain his masculinity, and bet a great dad. So, It's no wonder I enjoyed reading about Jeff and Donnie. Although he donated his sperm to his best friend,Beth, Jeff didn't expect to be the one raising his kids. After her death, he stepped up, and took on that responsibility. I respect that. And he clearly was overwhelmed with this new responsibility. I liked that his experience was realistic. And Mary Poppin's ain't got nothin' on Donnie. LOL He's a great 'manny', and soon much more. There's an age difference there, but it truly seemed inconsequential based on the maturity level Donnie had, and I enjoyed reading about their growing love and affection for one another. I also could sympathize with Jeff. It truly sucks having to deal with numerous bad experiences happening one after the other. But he gets his HEA... which makes all the crummy stuff beforehand seem like the storm before the rainbow. Good read.

One of my favorite S. Michael's story

This one has always been one of my favorite Michael's books, and the audio-book has become one of my favorite comfort rererererelistens. The story is a sweet, low angst, adorable, and yet HELLA HOT reads/listens. Perfect for a beach read, or a snuggled up in a comfy chair sipping hot chocolate listens. If you want a cute, sexy story that'll definitely please I highly recommend this story.

the book is really good, simple straight forward HEA which got lost in the fact the the 2nd character sounded like the child he was watching.
little bit of a shiver there when adult conversations are being had in that timber and tone.

This is a uncomplicated, predictable, but sweet story with mediocre writing and an unfortunate voice choice for Donnie, on of the MCs. It is really too bad b/c the narrator has a great voice and the other characters are fine. But, since much of Donnie’s dialogue is speaking TO a child in a childlike voice, the narrator choose to make Donnie sound like a Sesame Street character. His voice is a couple octaves too high and has the inflections of a child at inappropriate times. For example: Jeff says, trying to be sexy and romantic, “Do you want to retire upstairs” Donnie says “YES PLEASE!!!” as if he was 5 years old. It is really funny, but also mildly creepy for a mm romance. Thank goodness he brings it down an octave for the smex scenes otherwise this would have gone in to the DNF file as “disturbing.” There also some large plot holes and a contrived protagonist. I think is a story better read than listened to.