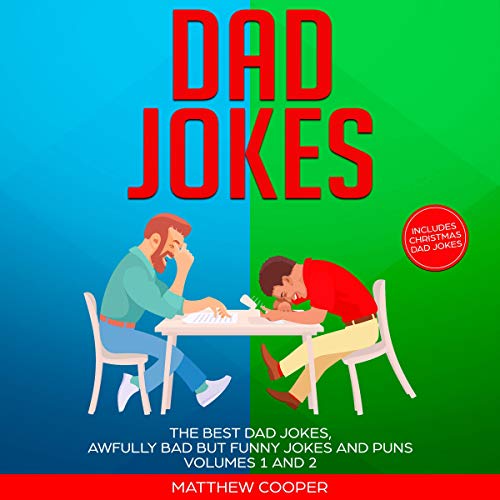 By: Matthew Cooper
Narrated by: Mark Finfrock
Try for £0.00

This audiobook is value-packed with two volumes inside:

There is almost a total of 900 painfully funny dad jokes in here!

Sometimes, nothing makes more sense than a good old-fashioned corny joke to make the heart merry and put a smile on everyone’s face. Dad jokes or bad jokes, either one is fine. They sometimes do the trick....

What is an elf who has just won the lottery called? “Welfy.”

There are plenty of puns in here that you can recite to your friends and pass yourself off as a wordsmith - unless your last name is not Smith.

What do you call a Mexican who's just had his 4x4 stolen? Carlos.

Looking for the perfect Christmas gift for Dad? Search no more with this hilarious audiobook of dad jokes.

What are you waiting for? Scroll up and click "Buy Now" for a hilarious experience with family and friends!

What listeners say about Dad Jokes: The Best Dad Jokes, Awfully Bad but Funny Jokes and Puns, Volumes 1 and 2

Cute, funny jokes. I got this for my dad as a goofy Christmas present. He loved it, too.

I gave my husband this as a stocking

I gave my husband this as a stocking stuffer right before our first child was born. He thinks it is great and now listen a few jokes out to my daughter and me every night before bed. The jokes are super cheesy, classic dad jokes.

I love Dad jokes and so do my kids

I love Dad jokes and so do my kids. There are some goodies here but quite a bit are situational. I love it, but my mother-in-law is quite over it!

Got this as a present for a co-worker

Got this as a present for a co-worker who loves corny jokes. The questionable decision as he has told a joke every day and has the office in stitches. It can never go wrong with Dad Jokes.

Most of the jokes are perfect for everyone

Most of the jokes are perfect for everyone but some are more geared towards kids but it gave me a chance to educate my kids. I loved the book and my kids loved the book too!! A very good set of audiobooks for my family. We love it so much. We always listen to the jokes and riddles from this audiobook.

I got this for my dad for a stocking

I got this for my dad for a stocking stuffer and he loved it. All the men in our family sat around for an hour and went through this book. The laughing was priceless.

My daughter loves it!

My daughter loves it! She brought it to listen. Lots of different jokes so there are ones for younger kids and ones for older children. This is a great VERY long list of children's jokes. My kids were hysterical listening through it with me. And I know we will have many opportunities to listen through it again and again because there are just so many jokes to pick from.

My kids loved this joke book.

My kids loved this joke book. It was non stop laughter for an hour that rattled the windows. It's hard to keep them all in the same place while trying to hold their attention, but they were completely absorbed in this book.

Bought this for my husband as an early Christma

Bought this for my husband as an early Christmas gift. He’s always sharing dad jokes so I just had to get him this. He and my son have enjoyed it very much.

my daughter gave it to my husband,

my daughter gave it to my husband, her dad...... We laughed and compared to his sayings. Ironically, and sadly, he has implemented some of those jokes into his regular conversations. lol

As a party person like me! This is really awesome.

As a party person like me! I need to bring a lot of jokes with me that I can share with my friends. This is really awesome.

This book is pretty awesome for me since as a Dad, I need to prepare jokes with my kids. Funny but not bad to share.

Brought this for the whole group.

Brought this for the whole group ended up listening it the jokes together and laughing out loud. This book is great!

An absolute waste of time. Don’t bother even considering this “ book”. Not funny at all.

this book is PATHETIC

What a great price!

This book is exactly what the title says it is. I’ve had good laughs with it already. Highly recommend

I gave my husband this as a stocking stuffer right before our first child was born. He thinks it is great and now listen a few jokes out to my daughter and me every night before bed. The jokes are super cheesy, classic dad jokes.

I gave this audiobook to my grandchildren

I gave this audiobook to my grandchildren and I bought it also for myself too. I and they loved it! It's so exciting to listening and entertaining.

It has a lot of fun

It has a lot of fun and has lots of riddles the whole family will enjoy. Easy enough for kids, yet not boring for adults. Great book. My daughter laughed all day with this one. She got the jokes and I love that when are appropriate for kids.

You know you have heard some of these.

You know you have heard some of these. Some are new. Either way, this book is the ultimate Dad book. Originally bought for my Father in law but my husband could not put it down, chuckling as he listens.