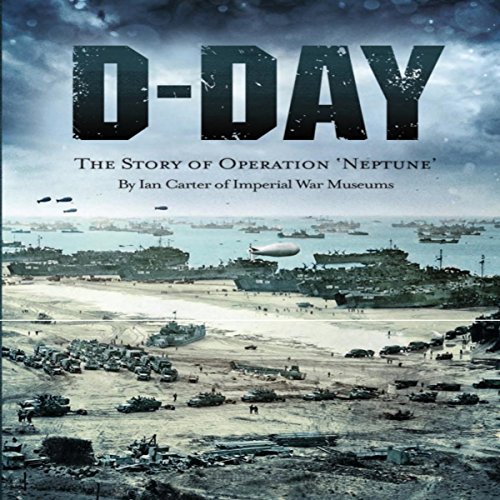 D-Day: The Story of Operation Neptune

By: Ian Carter of Imperial War Museums
Narrated by: Michael May
Length: 1 hr and 47 mins
Categories: History, 20th Century
3 out of 5 stars 3.0 (2 ratings)

D-Day: The Story of Operation Neptune

By: Ian Carter of Imperial War Museums
Narrated by: Michael May

"The invasion of Europe was planned by a small group of driven, determined, devoted and occasionally furious men."

On June 6, 1944, the Allies carried out the largest amphibious assault in history. Five divisions of British, American, and Canadian troops were landed along a 50-mile stretch of the coast of Normandy in northern France; their mission to gain a foothold ashore and begin the liberation of north-west Europe. The flanks of the invasion force were secured by a major parachute and glider drop of three airborne divisions. By the end of that eventful day, Hitler's "Atlantic Wall" had been breached and 156,000 Allied soldiers were firmly established on French soil.

Operation "Overlord" was the name given to the plan to liberate occupied Europe, but the large-scale naval operation to assault the enemy coast and get the armies ashore was codenamed Operation "Neptune." Almost 7,000 warships, transports, and landing craft of all types and sizes were involved. The assault was preceded by a massive air and naval bombardment, and the whole enterprise was carried out under an umbrella of fighter protection by the Allied air forces.

D-Day was a masterpiece of planning, preparation, and execution. It involved the largest gathering of naval vessels and landing craft ever seen, the careful stockpiling of vast quantities of vehicles, supplies, and equipment, and the movement, under great secrecy, of tens of thousands of men into assembly areas in southern England from where they would embark. A huge air effort was involved, which included months of preparatory bombing and intelligence gathering. Fundamental to its success was an Allied deception plan that successfully kept the enemy guessing as to where and when the invasion would take place.

This Audiobook should be titled a beginners guide to the basics of D Day.

The narration is as dull as can be.

The content has nothing to do with Operation Neptune.

What a waste of a credit.