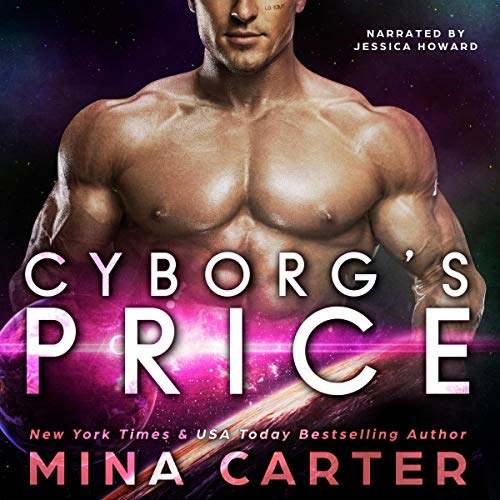 By: Mina Carter
Narrated by: Jessica Howard
Try for £0.00

He's one of the most dangerous creatures in the galaxy.... So, why can't she keep her hands off him?

A junior nurse aboard the combined fleet ship Valkyrie, Samara's days are usually filled with minor bumps and scraps and the occasional health or workspace check. But when a dangerous prisoner is transferred aboard, she finds herself on brig duty. Dealing with the big, lethal-looking military grade cyborg should be terrifying, but one look into his green eyes and she can't think of anything other than what his big, hard body would look like under the grey ship suit.

She's small, soft...and his enemy. He should keep his hands to himself and forget her.

Captured and en route to a medical facility for dissection and study, cyborg Lyon expects nothing but pain and degradation from his captors. But Samara isn't like the others, treating his wounds with care and igniting a fire deep within. When she neglects to ensure his cuffs are locked tight, all hell breaks loose. A hot, sensual hell against the cell wall. When his team arrives, Lyon knows he should walk away...but he can't. His little human has gotten under his skin. He'll take her as payment for his suffering, keep her in his bed, and pleasure them both for as long as he has breath left in his body.

However, the universe and the fleet have other ideas. A tracker on board brings a horde of fleet ships down on their heads. Can Lyon and Samara survive betrayal, a fleet attack, and their own suspicions, or will their happily-ever-after disintegrate under fire?

What listeners say about Cyborg's Price

this is actually a good series by mina carter though you would not know do to the narrator. she is in too much of a hurry and her voice is to flat. a shame but the story i stil good.

All the excitement, emotion, heat and suspense one can expect from a story from MC! The narration was fine once I got used to the speed- talking! It is worth spending the time listening to this and will certainly look out for more of her books.

I read this a while ago and was a favorite. So glad to see it went audiobook. It was great to reread (listen) and I do so enjoy listening to the narrator.

I enjoyed this audiobook very much. The heroine is a nurse onboard a military spaceship. She’s assigned to go patch up a prisoner who the military have been interrogating. When she arrives in his cell, she sees he’s a very attractive cyborg. During her treatment of his injuries, she makes a mistake and he gets free and proceeds to seduce her while shipwide alarms are blaring an attack in progress. When freed by his fellow cyborgs, Lyon decides to take her along. Something happens aboard the cyborg ship that causes them to look at her with mistrust, but when chaos strikes she’s the only one who can intervene to save them. Narration was well done.