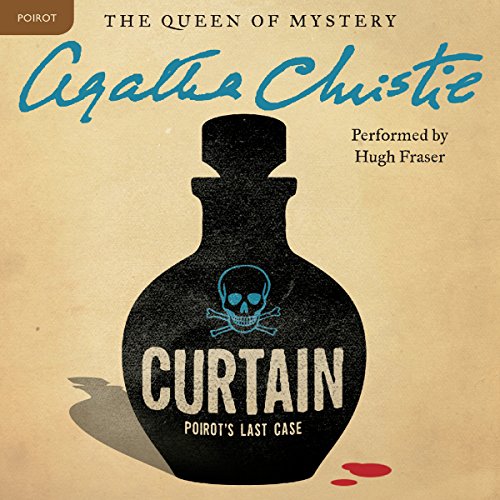 So Hastings was shocked when Poirot declared that one of them was a five-times murderer. True, the ageing detective was crippled with arthritis, but had his deductive instincts finally deserted him?

Whilst many of the later books in this series were disappointing this was an excellent ending to an overall wonderful series. It was fantastic to have the pairing of Poirot and the gentle Hastings for the last mystery. If you have enjoyed Poirot you will not be disappointed.

have always liked Agatha Christie, but especially have I loved her Belgian detective. This story takes us full circle with Poirot and Hastings, back to Styles the scene of their first adventure together. I won't go into more detail as I don't want to give any spoilers. This is a worthy addition to your Christie library, and I highly recommend this book. Good hunting!

My favorite of all Hercule mysteries

Very nostalgic, I was in tears. The relationship between Hercule and Hastings so warmhearted in this book. I loved, loved loved it. I will listen again sometime with less sadness and more appreciation of very good friends.

Hugh Frazier did a great job on Curtain

Yes. Hugh Frazier did a great job in playing the each of the role of the individuals in Curtain Poirot's last case. I have read the book and seen the movie. The Audiobook was the best way to take in characters

Well Yes, Both my wife and myself read the book and preferred the Audiobook and the Movie

His representative of all the characters was excellent. I purchased another Agatha Christie's on Audiobook narrated by Hugh Frazier

It made you think about he characters and the ending

Will look for more of Hugh Frazier's Audiobooks

another Christie gem - you will enjoy the story as she takes you back in time and you discover that trains of thought were not so very different then as the present... but a sad farewell as this is Msr. Poirots last case,

An Amazing and Emotional Farewell to Poirot.

For fans of Poirot this final book will be thrilling and unexpected. Poirot impresses and surprises us to the very end. This is a story not to be missed.

Every word satisfies in this jewel of a mystery. Christie and Fraser are a perfect combination.

A very fitting ending to the saga of Poirot...as a big fan I was touched.

I saved this book for the very last of my Agatha Christie binge listen. My goodness. I almost wish I hadn’t have read this one. Hit hard. I have no more Poirot to read... almost felt like someone real and now, well....

The movie adaptation contradicted this book in a reference to the victim in the earlier book, The Mysterious Affair at Styles.
I enjoyed this book!