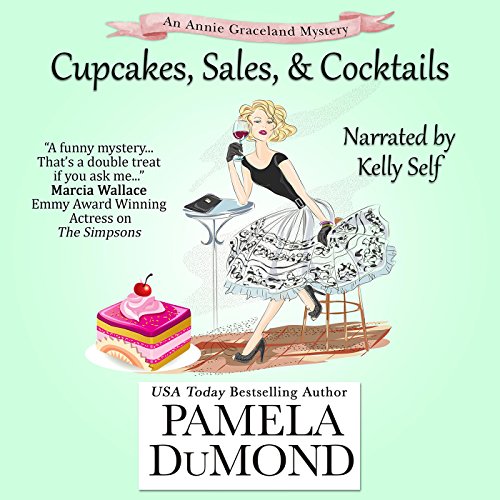 By: Pamela DuMond
Narrated by: Kelly Self

Annie Graceland's a baker with a pinch of psychic ability. She's empathic; feels other people's lusts, urges and desires in her own body. Usually it's simple – someone's craving chocolate, or lusting after the wrong guy. But since Annie discovered she can see and talk with ghosts, her life became a little more complicated.

Annie's re-entering the dating world and her friends push her to buy some new clothes. Annie meets and squares off against Edith Flowers, the world's most obnoxious department store clerk. When Edith's murdered, and doesn't pass to the After-Life, Annie agrees to investigate her demise, and infiltrates the crew of department store suspects.

Was the killer the new manager, the archrival in cocktail attire, the bra fitter? Will Annie solve Edith's murder so she can go to the light? Will she find anything new to wear that she can afford? Can Annie resolve her latest debacle before handsome Detective Raphael Campillio finds it odd she keeps showing up at murder scenes?

I would recommend it to any friend looking for a cozy short story with ghosts. The story takes place in one day. There is a murder at a high-end clothing store and it is fun discovering who the killer is.

Edith, the ghost. I loved when she found out she was dead and enjoyed listening to her help find her killer.

Which character – as performed by Kelly Self – was your favorite?

I had some trouble differentiating between the characters. I would have to say Annie. She read her character very well.

I had some laugh-out-loud moments! I love it when a book can make me laugh.

This is the second book in the series. I am going to go back and read the first book as I think it may help me understand Annie's abilities a little more. I think it might be fun to see ghosts! At least for a little while. Thank you Pamela Dumond and Kelly Self. It was a wonderful experience.