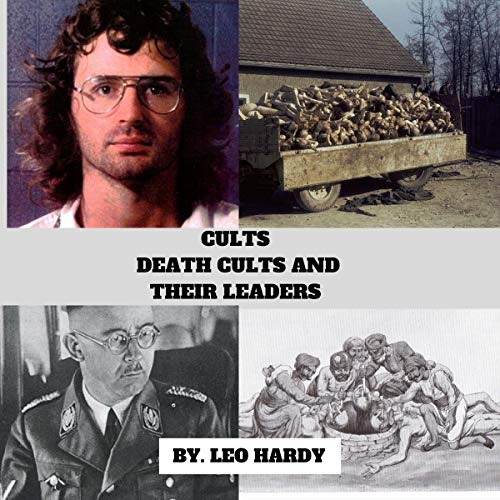 Cults Death Cults and Their Leaders

Cults Death Cults and Their Leaders

The word "cult" conjures up different images and brings to mind far too many names to ever fully list.

The goal of some cult leaders was wealth and power, while others were after comfort or sex. The darkest and most notorious cults and their leaders sought to spread their evil messages through violence and mass murder, through war and genocidal acts. From the Thuggee cult that inspired the term "thug" to the brown shirts of Germany who would become the most destructive cult of all time, the Nazis.

The cults and cults leaders covered in this book are:

When people think of the Nazis, Adolph Hitler, and the Holocaust are often the first thoughts to come to mind. While Hitler organized this cult of oppression and murder, its roots started somewhat earlier. The more we know about this death cult, the more likely the world will be to avoid similar tragedies in the future. In the end, Hitler may be the prototype for all cult leaders and his achievements the darkest dreams come to life of most of them. His Nazi cult the definition of the word hate. Hitler's name has become an abomination, mention only to damn those who would attempt to walk in is blood stained footsteps.

This book is read by a man who should do ASMR to put people to sleep!
Also during the story he states AFT instead of ATF. Also mispronounces several other things.

This is an incredible book to find out about famous pioneers. I particularly preferred to examine Hitler, his Nazi clique the meaning of the word despise. Hitler's name has become an evil entity, notice just to damn the individuals who might endeavor to stroll in is blood-recolored strides.

At the point when individuals think about the Nazis, Adolph Hitler and the Holocaust are frequently the main musings to ring a bell. While Hitler sorted out this clique of mistreatment and murder, its underlying foundations began to some degree before. The more we think about this passing religion, the more probable the world will be to stay away from comparative catastrophes later on. At last, Hitler might be the model for all religion heads and his accomplishments the darkest dreams go to the life of the vast majority of them.

The Order of the Solar Temple religion is an outstanding clique in Europe. In America, however, the tales of this terrible religion isn't outstanding by any means. The religion was controlled by Joseph Di Mambro and Luc Jouret. This doomsday faction at last finished in murder and suicide, the same number of them do. This is an amazing book.

This was an awesome subject which is different but very important to know about. I loved the whole book.

A well-crafted book about a chilling subject. Thanks to Mr. Leo Hardy for having the courage to write this.

This book was artfully written with facts and feelings of the former cult members by Mr. Leo Hardy. I couldn't put it down until I finished the book! I recommend this book!

The most intense eye opener I have read in a long time. Thank you, Leo Hardy, for your information. Beautifully written!

This book accurately documents the horrors of this cult and the effects on the lives of the children of the cult. Great job Mr. Leo Hardy, very recommended to all.

I love human interest stories and I do not recall hearing about this cult so I bought the book to be informed. The writer discusses other cults and strays some from the Alamo story. I enjoyed this book until the end.