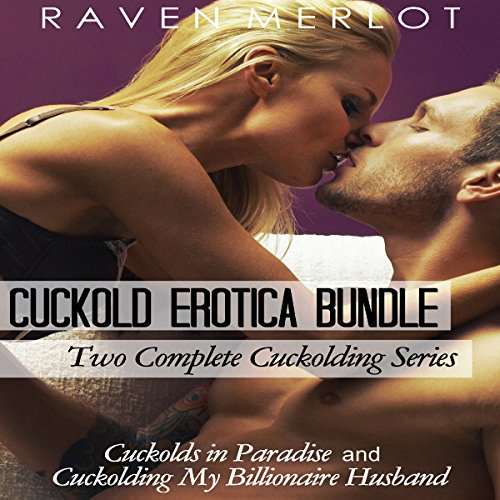 By: Raven Merlot
Narrated by: Ruby Rivers
Try for £0.00

Cuckolds in Paradise: "Eden Redux" is a tropical swingers resort where people come to make their most forbidden fantasies come true. Kate and Eli came to fulfill their long held dream of getting knocked up, and they'll get help from every man on the island before they are done. In their sexual relationship, Kate is the boss. She has no qualms about lining up men to give her pleasure while her husband watches, encouraging them and telling her how much he loves her. Jesse and Danielle arrived at the resort not knowing what to expect. They were curious but never expected to meet a couple like Kate and Eli, let alone be inspired by them.

Cuckolding My Billionaire Husband: John is like every other billionaire. He's arrogant and entitled. He even thinks he can cheat on his wife. When she finds out she turns the tables on him and forces him become her cuckolded slave. He learns to anticipate her every desire and willingly abandon his pride for his wife's lusts for other men. Included in these series are multiple encounters between insatiably dominant women and men who are NOT their husbands. The unexplainable feelings of awkward, aroused inadequacy permeate the now cuckolded husbands who have no choice but to abandon their egos and their wives' bodies to the lusts and rough treatment of strange men. As with Raven Merlot's first series, My Husband, My Cuckold, these books do more than just describe graphic sex between married women and men who are not their husbands. They also focus on the feelings that the cuckolded men experience as they watch their wives receive previously unimaginable amounts of pleasure from young, single men who gratefully worship a woman's body.

Strictly for open-minded and adults!

These were two very sexy and fun stories. The speaker was great and the stories were fun, I really liked the detail put into the emotional parts of the relationships.

Cuckolding is so much fun

These two books were great to listen to. I preferred Cuckolds in paradise but both were good. The narrator was really great. I hope she and Ms. Merlot work together more.

I’ve read a lot of Raven Merlot’s stuff and this is the first audiobook I’ve tried. The narrator is really good and I loved being able to listen to this on the plane. No one knew what I was doing!

I can see it in my mind

The descriptions in the two stories were very good. I could see the sex happening. The narrator made the different people seem distinct without sounding silly like some women do when they talk like a man. I recommend this book for anyone enjoys cuckolding and erotica.

Did not do it for me

The stories did not show much imagination. The dialogue is almost juvenile if not for the subject matter. The narration comes across like a 15 year old boy trying to sound tough.

This book is not what I expected. I know I know the title says it all. i wasn't expecting it to be all up front as soon as the story started
I would say this is a good read. however little to much for my taste.
"I was given this free review copy audiobook at my request and have voluntarily left this review."

Sometimes you are too lazy to read and listening to an audible fits the bill.

These two complete series are things dreams are made of. It was a great escape to listen to.

I look forward to listening to more.