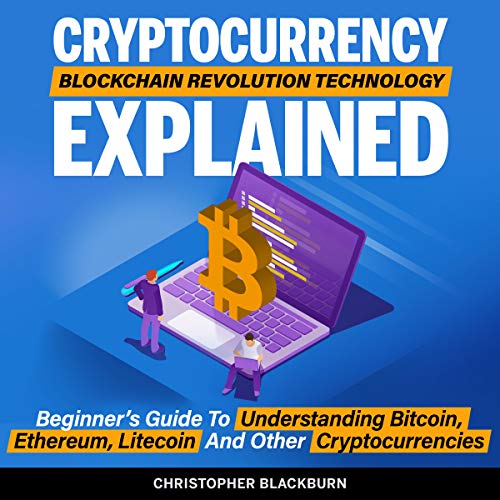 By: Christopher Blackburn
Narrated by: Mark Norman
Try for £0.00

The cryprocurrency revolution is here!

Want to learn more about the super exciting cryptocurrency industry and how exactly to get involved? Maybe you just want a little background on some of the “hotter” options before investing time and/or money, or you just want to know the basics of what exactly a blockchain, cryptocurrency, or digital wallet is? Download this book, and you’ll learn many reasons for the excitement and hype surrounding cryptocurrencies and the blockchain technology.

I’ve provided the backgrounds on the major players among the cryptocurrencies themselves, as well as some of the mining software providers and the available digital wallet companies. Learn how to start mining some of the hottest coins in minutes. Get a crash course on how to keep your accounts, emails, computers, and cryptocurrencies safe with some simple tips that you can immediately put to use. A lot of the information I’ve put together here is either hard to find or is so spread so far apart that it can takea full day just to find what you need, and another day just to ingest, digest, and understand all of the pertinent information.

Thousands, and more likely, millions of individuals and companies around the globe wish they had taken these steps early in Bitcoin’s history when they were less than $10 USD and now, thousands of people are looking for the next big thing. You have the opportunity to join any one of several growing communities, and the potential appears to be quite high for the near future and for the long run, at least for some of the current contenders. Not to mention, some of the new ICOs. Download this book and find out which cryptocurrencies have been around the longest, who has some ofthe best prospects, and who’s the new kid on the block.

I would give this book five stars, I would definitely recommend the book as an extremely readable and user-friendly.

The author has presented such a useful book for me, Personally, i was looking for this book for so long. Thanks to my friend who give this book. Really felt good to listen to it.

If you are beginner in Cryptocurrency Blockchain Revolution Technology Explained then get this book. This book will teach you decibel that. Appreciating stuff.

Wonderful book! This kept my interest from beginning to end. Would love to see more from this author.

Didn't realize the publication date but still a good review of develops. Also a great reminder of the old days of operations.

This is a perfect book for anyone who needs a kick-start to change their lives for the better. Bolton gives expert advice with very practical steps to improve productivity

I picked this book up in the hopes to learn more of bitcoin, blockchain, mining, ICO, and how to ride out on the cryptocurrency market

The author has presented such a useful book for me, Personally, i was looking for this book for so long. Thanks to my friend who give this book. Really felt good to listen to it.

Its very rare that we heard they have any audible book for learning Cryptocurrency Blockchain Revolution Technology Explained. Its an new era for programming world. Appreciating content.

I gave 5 stars because it is well arranged, the topics are clear enough and the references are good, I would recommend it for everyone.

Wonderful read this book. This book is very helpful. It really is important and useful.

The blockchain concepts, why they are important, why they are growing in popularity. It also contains little deep technical knowledge although you can skip those chapters. I consider it a good introduction book because It accomplished its purpose, you need to understand the concepts in order to understand the difference between the technology implementation across the different blockchain platforms (bitcoin, etherum).

This book is an excellent beginner's guide to the up and coming technology of blockchain. Blockchain is the technology behind Bitcoin and other cryptocurrencies. The transactions that use these digital currencies require the use of blockchain- a very secure form of coding- in order to make everything work.

This is an extremely clear, step-by-step explanation of Blockchain with numerous simple but relevant examples.
I’d recommend it to anyone interested in the concept of Blockchains and their potential impact.

I should be clear that this book goes above and beyond with the amount of topics covered. I especially was intrigued by things such as second layers to the bitcoin network, and atomic swaps between different coins. Excellent read.

The great thing about this book is that the author sheds light on the whole entire concept of cryptocurrency. I was introduced to many different subjects and subcategory of crypto very quickly, and everything was informative and simple to understand. A great intro to this digital space, and it is definitely a book you'll want to read with a highlighter.