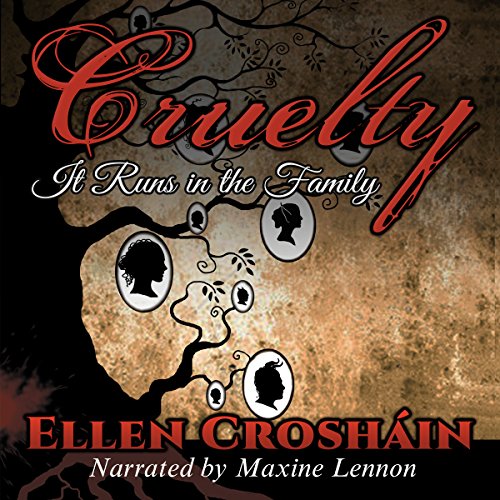 Once a year, in the caves deep below the house, the Family gathers to perform a ritual to appease their god. But Faroust only accepts payment in blood.

Eliza MacTir, youngest daughter of a powerful Irish family, was born into fae gentry without the magical gifts that have coursed through the Family's veins for millennia; she was an outcast from her first breath. Desperate for freedom, Eliza's flight from rural Ireland is thwarted by the Family's head of security. The only weapon she has to fight her captor is her own awakening sexuality. Drawn into the world of magic and gods, Eliza must find a way to break free, even if it means breaking the hearts of those she loves - and letting her own turn to stone. Cruelty, it runs in the Family.

A wonderfully written story that balances lust, romance, intrigue, humour, and celtic mytholgy.. I enjoy listening to this audiobook.

Once a year, in the caves deep below the house, the Family gathers to perform a ritual to appease their god. But Faroust only accepts payment in blood.

enjoyed this book very much

Did her means justify the ends? Nope

Overall & Story or more like a 2.5
Unfortunately, I lost interest in this story pretty quickly. I had hopes based on the reviews. And 11+ hours is a long time to listen to a story in which I have little interest. But it's definitely not the worst story I've purchased and listened to.
There's Eliza, her mom, Ruby, her dad, Jacob, her friend Julian, the god Faroust, and her ?, Cornelius. All of them are in or connected with fae royalty. All of the characters were ok except Eliza. I didn't like Eliza. She was cold, manipulative, deceitful, and petulant regardless of her justified reason for feeling unwanted and ignored. The author failed to make her a sympathetic character. I was hoping this would change over the 11 hours, but it didn't. The story also failed to be sexy AT ALL. There was sex in it, not gratuitous, but more than 2, I think. Most of them were not highly detailed, and none were drawn out or used explicit words beyond f**k and, maybe, cock. Part of the lack of sexiness or sensuality was the narrator. The narrator did ok. But she sounded too childish during the sex scenes and cursing, so it came across, again, as just petulance. Additionally, I didn't like much of the dialogue. There was nothing that created or held my interest. It was all simplistic. Even the bit of unexpected shift in the story to a bit of a mystery didn't help. I was pleased about the shift, initially, thinking that the story might, then, improve. But it was all for nothing. Along with the simplistic nature is its not flowing naturally. It's not that there were coincidences or manufactured plot points to move the story unnaturally, but the movement of the story did leave me wondering, at times, how the story moved from one point to another. The story shifts were not smooth. Finally, the plot point to have a god who doesn't know when someone is lying to him was the last straw to me. Most of the story flowed from that construction. But that type of god just didn't make any sense to me. He could do almost everything else but not that. Really?! That seems basic god-level stuff. But maybe that's just me….